After Erika, the people of Petite Savanne find a home at the Dominica Grammar School 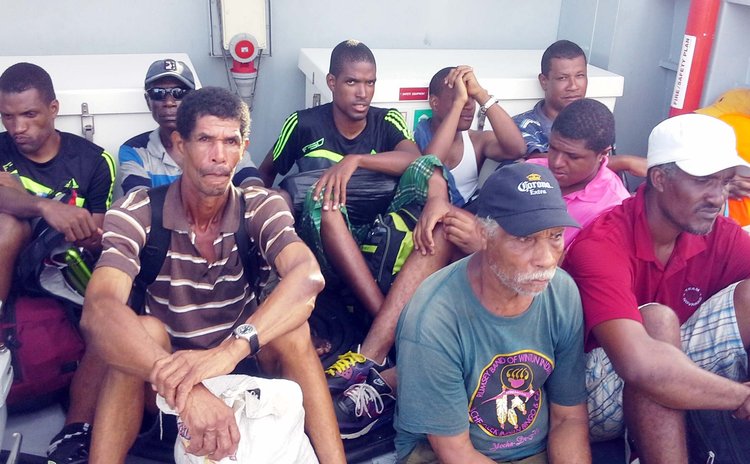 They're not at the school to learn Spanish and English and grammar or physics and chemistry and history. It is their new home.

Last week the Dominica Grammar School (DGS) near Bath Estate in Roseau, instead of admitting new students for the September term, welcomed babies and octogenarians, teenagers and middle aged folk, fishermen and bay-oil producers, housewives and teachers. Everyone.

Using helicopters and boats, the government evacuated dozens of residents of the Petite Savanne Community.

Over a few hours on the morning of Thursday 27th August tropical storm Erika poured thousands of gallons of water onto unstable mountains. Tonnes of boulders, trees, mud and sand rushed down hill and buried houses, plants and people and animals. Petite Savanne was declared a disaster area. And the evacuation began.

"The only way I can go back Petite Savanne is if government make a track and have a ferry come where we could load our belongings to bring down but no one can go and settle down there again and build," said Stanford Anselm at his new home at the DGS.

It is a temporary home. Anselm plans to move farther away from Petite Savanne. With his daughter and five- year old grandson he is hoping to live in Marigot with his stepson.

He may be travelling practically empty-handed, with just his shirt on his back. Anselm said that since they were evacuated so suddenly they could only grab a few belongings. He hopes he will be able to go back to Petite Savanne to collect the remainder before he moves on to Marigot.

"My house wasn't damaged because I live lower down Petite Savanne," he said. "But next morning after the storm I went to help looking for those buried and helping families to cross over the landslides to move them from the bad areas in case more rain fall."

Meanwhile, Doreen Durand, the Manager of the DGS Shelter told the Sun that on 1st September 2015 there were about 105 people from Petite Savanne now residing at DGS.

Durand noted that that number would change because family and friends were taking the refugees away.

Currently the centre has ten rooms and most of them are filled with families. Though Durand did not expect to receive more evacuees from Petite Savanne she noted that if she did the shelter would have to be expanded to the new wing of the DGS.

She said the shelter was not initially meant for the people from Petite Savanne but DGS is the hurricane shelter for Roseau.

"When the disaster happened, the shelter had to be opened on Saturday to accommodate anyone in Roseau who might have been displaced and the people in Paradise Valley from Bath Estate but nobody from Bath Estate came down here," she said.

She added that on Saturday 31st August 2015 the shelter had 15 Dominican-French nationals who walked from Grand Bay to Roseau and were directed to the shelter where they were housed until they left on Sunday.

Durand noted that the people from Petite Savanne who now live at the DGS seem to be in good spirits because they are surrounded by family members.

"People are donating, people ae giving stuff really coming to the plight and need of the people…we have had so many things I cannot say what we don't have because as I say it we get it," she said.