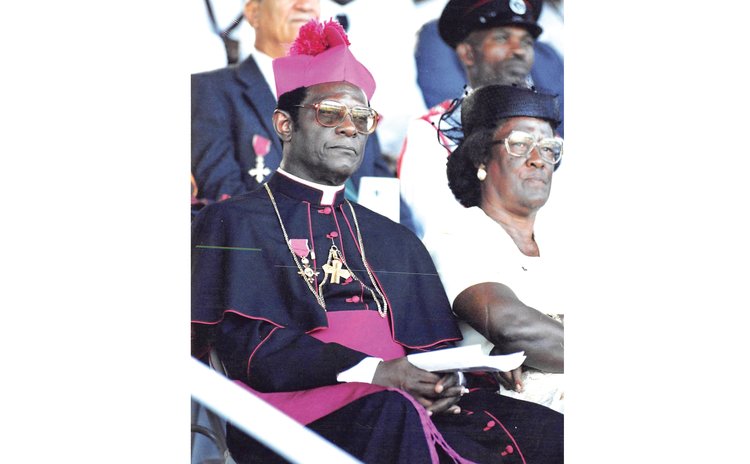 Cardinal Felix (left front) at a National Day event in 1999

The 60th anniversary of priestly ordination of His Eminence Kelvin Edward Cardinal Felix will be observed with a grand Eucharistic celebration at the Windsor Park Sports Stadium on Sunday April 17th from 9 a.m, a release from the Diocese of Roseau said.

The Dominican Catholic community is in the process of planning this major event and the entire Diocese has been invited to attend as there will be no other mass in the Diocese on that day.

The day will culminate with cultural activities in the afternoon and a focus on youth and vocation which is something close to Cardinal Felix.

Several Archbishops, Bishops and priests from around the world are expected to be in attendance at this special anniversary service over which the Cardinal himself, is expected to preside.

Cardinal Felix was ordained as a priest on April 8th 1956. He was the first diocesan priest from Roseau and the first Catholic priest to be ordained in Dominica.

Among the various positions which he subsequently held, he was Principal of the St. Mary's Academy from 1972 to 1975. He also served in regional leadership as the Associate General Secretary of the Caribbean Conference of Churches from 1981 to 1986 and President of the Antilles Episcopal Conference from 1991 to 1997. In addition he served internationally on various Pontifical committees of the Holy See.

He was appointed as Archbishop of the province of Castries on October 8th 1981 and his province included the dioceses of St. George's in Grenada, Kingstown, Roseau and St. John's/Basseterre. He was awarded an Honary Doctorate of Law from Francis Xavier University in Nova Scotia in 1986.

At the Papal Consistory of February 22nd 2014, Pope Francis elevated the then Archbishop Felix to the rank of Cardinal of the Roman Catholic Church.

In addition to the many distinguished positions in which he has served, Cardinal Felix was also awarded the Order of the British Empire (OBE) in 1992, the Dominica Medal of Honour, Dominica's highest award, in 1999 and the St. Lucia Medal of Honour in 2002.