CARDINALS: Gold Was Their Colour (Part A) 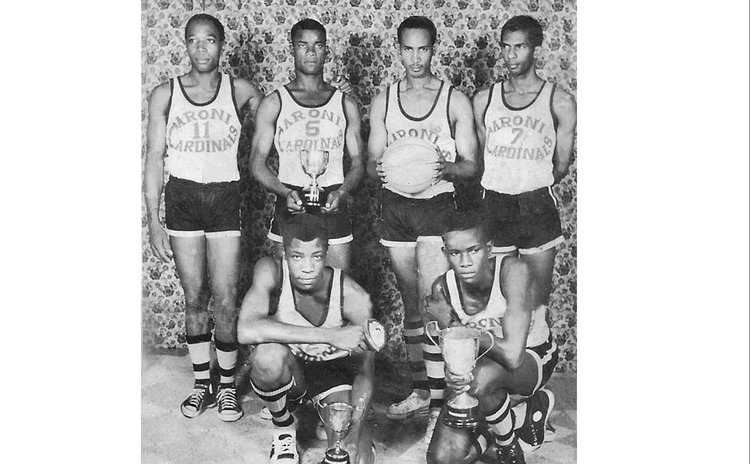 They were brilliant, entertaining to watch as they played their brand of basketball, and a force to reckon with. Yes. Those were the Cardinals!

The Cardinals basketball team has been described by many as a legend in their own right, with very good reason. They earned that accolade by stamping their authority on local basketball and left an enviable record in the history of the sport on Dominica, if not the OECS.

Cardinals made their debut on the basketball scene in 1968, together with three other teams, viz. Centaurs, Falcons, and Nationals from Grand Bay. The other teams competing in that year's League were Argonauts, Atoms, St. Mary's Academy and Dominica Grammar School. The Roseau-based team then comprised only six players: Wilmoth LeBlanc, brothers Bernard Thomas and Herbert Thomas (Captain; also island-team captain), Phillip Winston, and Clem Jno. Baptiste and Cuthbert Jno. Baptiste - two other brothers. In those good old days admissions to the games, which were played exclusively at St. Mary's Academy, were a hot 10¢ and 25¢.

Caroni Cardinals quickly rose above and outshone all the other teams in the League, which then comprised only a single Division. In their first encounter, vs Argonauts, Cardinals more than tripled their opponents' score, 62-19. According to the Dominica Chronicle of Wednesday 11th January 1968, "From the start the match was completely in Caroni's favour and it was no surprise that they emerged victors at the end. High scorers for Caroni were B. Thomas with 22 points and W. LeBlanc 16 points, while P. Pemberton topped for Argonauts with 9 points."

Cardinals went through their inaugural season undefeated to capture both League and Knock-Out Championships. In the team's second season, the League saw the exit of Argonauts; the entry of three new teams, viz. Blackburns, Defence Force and a second SMA team; and the equal separation of the ten teams then into two Divisions. That 1969 season also saw Cardinals more than doubling one of their opponents' scores (92-40); losing their first match (to Atoms, 39-50); but retaining both League and Knock-Out Championships!

Cardinals' next (surprise) defeat came four years later, at the hands of the Dominica Grammar School in May 1973. However, the team continued to shine, and by the end of that season they had captured both League and Knock-Out Championships for six consecutive seasons. They also won the 1973 Off-Season League competition.

The year 1974 was certainly not a bright one for Cardinals as the team's fortunes began to change. That year they conceded both League and Knock-Out Championships to Pros and Electrons respectively; both new champs were only 1 year-old then.

Cardinals, however, returned with a bang in 1975, to recapture both League and Knock-Out Championships - a feat they had accomplished 7 times in their eight seasons of existence thus far. The next two seasons saw the team relaxing on their stranglehold at the top, exchanging championships with Flames - their new rivals. Cardinals captured the Knock-Out trophy in 1976 and the League Championship in 1977, while Flames secured the League Championship in 1976 and the Knock-Out in 1977, and left Cardinals "trophy-less" in 1978.

Due to an internal squabble in 1978 the team changed their name to Cougars that year, but reverted to their original Cardinals the following year and went on to win several other championships and trophies over the next two decades. For example, by 1989 they had already captured 15 League, 13 Knock-Out, and 4 Play-Off Championships, as well as the Cee-Bees Classic and an Off-Season.

Cardinals' impressive record included wins against the national teams of four regional countries/islands, viz. Antigua, Grenada, Montserrat, St. Kitts, and Union Island in the Grenadines, and top teams from neighbouring Martinique; they also won a tournament in Pointe Noir, Guadeloupe. The team also has the distinction of being the only one to defeat the Logan College Basketball Team from the USA in 1982.

Information presented above was obtained mainly from archived newspapers and from a joint discussion with Wilmoth LeBlanc and Bernard Thomas. Thanks Dave Williams, for your contribution. Special thanks to Yannick Bethel at the Government printery for "fixing" up the 1968 photo.