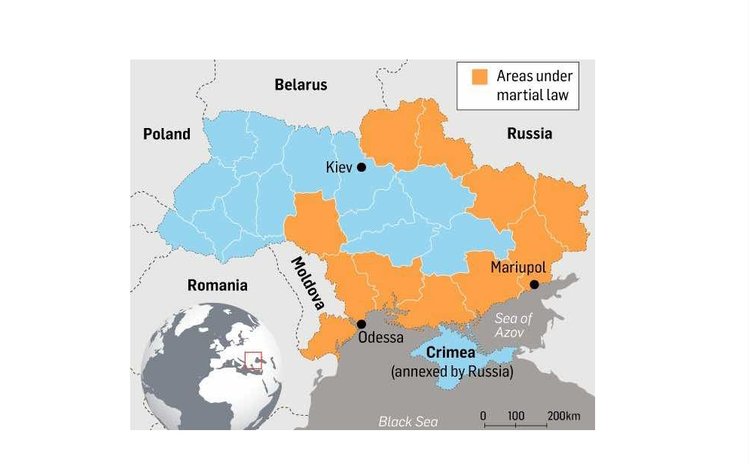 Global tension is rising concerning Ukraine, the second largest country in Europe after Russia which it borders. Ukraine was a part of the defunct Soviet Union, declaring its independence in 1991 when the Union dissolved.

Should regions, as geographically distant from Ukraine as the Caribbean, care about the hostility that is escalating over it between Russia and the countries of the North Atlantic Treaty Organisation (NATO) which includes the United States (US) and Canada?

The short answer must be yes. Every region in the world would be impacted by a conflict over Ukraine. The Caribbean would be affected by higher prices for oil and gas that would result from Russia cutting off oil supplies to Europe and the consequent competitive bidding in the markets from which Caribbean countries now purchase these commodities. This would have been bad news for Caribbean economies at any time but, coming in a period when these countries are still struggling to recover from the adverse effects of the COVID-19 pandemic, higher oil and gas prices would plunge many economies into further decline.

There would also be a knock-on effect on the cost of imported goods and services, including food and the provision of vital utilities such as electricity and water.

Beyond the economic and financial impact on the region if oil and gas prices rise, small Caribbean countries which came to independence by exercising the right to self-determination and which treasure their sovereignty and territorial integrity, would have to be very concerned should Russia invade Ukraine to bring it back under Russian control.

Any diminution in the sanctity of these norms of international law would pose a threat to Caribbean Community (CARICOM) states, such as Belize and Guyana, which are faced with territorial claims.
The root of the problem in the Ukraine rests in two things: the belief by the Russian government and especially President Vladimir Putin that Ukraine is, historically, part of Russia; and President Putin's further conviction that NATO countries wish to use Ukrainian territory as a staging post against Russia. Putin had repeatedly said that "we (Russia) are categorically against any further NATO expansion eastwards because it poses a threat to us". He adds, "It's not us who's advancing to NATO, it is NATO coming to us and its illogical to talk about Russia's aggressive behaviour".

In 1991, when Ukraine became independent from the dissolved Soviet Union, it declared itself 'neutral'. No doubt, it did so, because even then it was wary of Russian ambitions to control its neighbouring states. Ukrainian concern turned out to be justified when, in 2014, Russia encouraged forces in Crimea to declare it an independent Republic effectively annexing it to Russia.

The Crimea is physically a peninsula of Ukraine where Russia has, traditionally, stationed its Black Sea Fleet at the Port of Sevastopol. Russia's annexation of the area appears to have been a response to the Ukrainian government's attempt to join the European Union (EU) – a move that was seen as a further step to link Ukraine to European countries that are also part of NATO.

In recent years, Russian unease over Ukraine increased over the Ukrainian government's expressed desire to join NATO, and the latter's pledge in 2008 to allow it to do so, although no date was set and still does not exist.

Russia has now amassed over 100,000 troops near Ukraine and sent a detachment of warships into the Black Sea. All this has been interpreted by the Ukrainian government, NATO and the Western media as intent by Russia to invade.

Putin appears to have two objectives: the first is to stop Ukraine from joining NATO and the second is to limit the expansion of NATO to include any countries other than its present membership. For their part, leading NATO nations, including the US have made it clear that they will not negotiate NATO's membership with Russia.

Thus, the standoff continues, and tensions heighten amid recent efforts from NATO leaders to engage Russia in a dialogue. An encounter between the Russian and British Foreign Ministers was summed-up by the Russian as "a mute talking to a deaf perso". And a visit to Moscow by French President Emmanuel Macron for talks with Putin showed no sign of a solution. Russian-US talks also proved unproductive.

The danger of the Caribbean region being thrust into this row became evident when Sergei Ryabakov, who led the Russian delegation in a meeting with US officials on January 12, said he would not confirm or exclude Russia sending "military assets" to Venezuela and Cuba. US National Security Adviser, Jake Sullivan, described the Russian statement as "bluster".

Bluster or not, the Caribbean cannot ignore events surrounding Ukraine – a country with which all CARICOM countries have diplomatic relations as they do with Russia and the NATO member states.

Considering contingency arrangements for oil and gas supplies – and their prices – is one thing that Caribbean governments should be collectively considering. They should also be jointly indicating their concern to Russia, that however tempted it may be to do so, military intervention in Ukraine should not be contemplated and would not have the support of governments that uphold and respect international law.

In every international forum, Russia and the NATO nations should hear Caribbean governments, in a unified voice, calling for diplomatic engagement and not conflict to reach a solution to this problem that would leave Ukraine's territorial integrity intact.