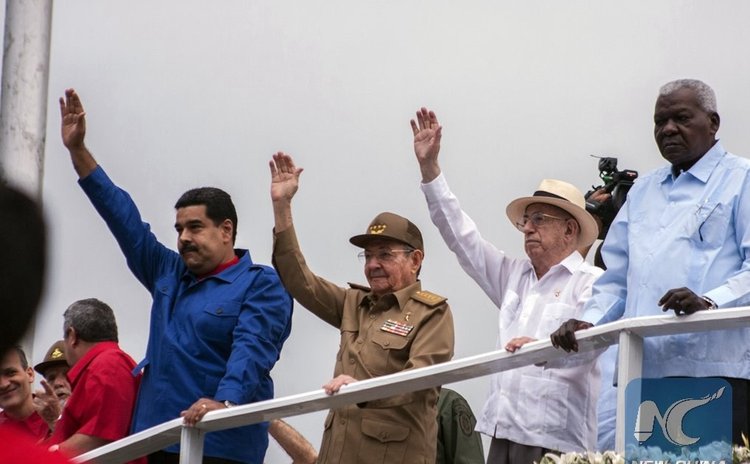 HAVANA, June 3 (Xinhua) -- Foreign ministers of the Association of Caribbean States (ACS) on Friday discussed regional challenges and the action plan for the next two years hours before the 7th Summit of the ACS in Havana.

At the inauguration of the meeting, Cuban Foreign Minister Bruno Rodriguez said the summit takes place at a "complex" moment characterized by a systemic economic crisis and the threats of "outside forces" to the political stability of the region, particularly in Venezuela.

"The advances of Latin American and Caribbean integration, democracy, social justice, and independence are threatened by an imperialist offensive to restore neoliberal models that already left unfortunate consequences for our countries," said the Cuban official.

Earlier in the day, Havana expressed its support to Venezuela's socialist administration in a government statement which criticized the recent position of the secretary general of the Organization of American States (OAS) who called for an urgent meeting to discuss the political and economic situation in the South American nation.

Rodriguez stressed that the region is posed with the most unequal distribution of wealth and that is a test many nations confront.

"We have to face these challenges with joint actions as well as consultation, political concertation and cooperation as it's established in the ACS founding principles," he added.

The Cuban minister said the organization has strengthened its regional role in the last four years due to the optimism, energy and political will of its member states in the process of uplifting its presence in the continent.

"The final declaration of the presidential summit and the joint action plan will help us face the area's problems and challenges for the next two years and embark on fruitful cooperation in many areas like climate change, transportation and sustainable tourism," he stated.

Twelve heads of States and Prime Ministers of the area are already in the Cuban capital and will convene on Saturday at Havana's Presidential Palace for the summit.

During the summit, a new secretary general will be elected to replace Colombian diplomat Alfonso Munera, who has headed the organization since April of 2012.

The Association of Caribbean States (ACS) was created in July of 1994 in Cartagena de Indias, Colombia, with the aim of promoting consultation, cooperation and concerted action among all the countries of the Caribbean, comprising 25 member states.