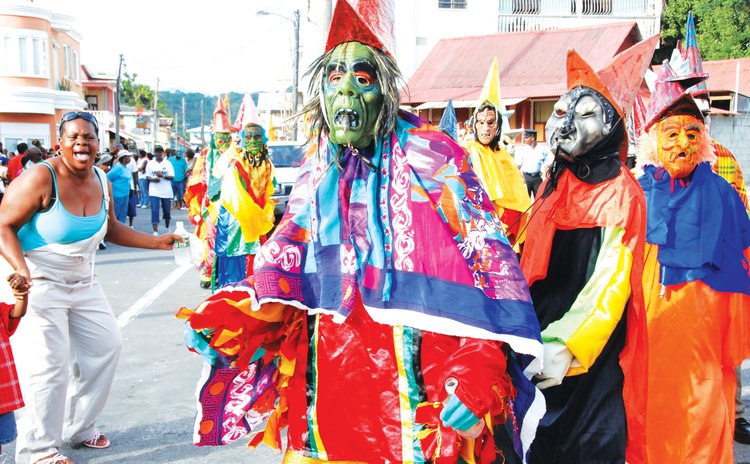 Ban Move at the opening of Carnival in Roseau

It's Carnival day in Colihaut.

The rhythm of 'lapo kabwit' drumming is driving, unceasing, interspersed with the shrill sounds of whistles.

As the drummers play, a group of masked men dance their way through the crowd in a line formation, keeping time with the beat.

No part of their bodies is exposed and they are clad in an odd assortment of clothes, including skirts.

They do not sing, but they make guttural sounds as they dance rhythmically through the crowd.

To a visitor, this can be a strange sight. But to the people of Colihaut, this is Bann Mové -- an old and cherished village Carnival tradition.

They are adamant that Bann Mové is a unique part of their village culture.

"It consists of lines of people in masks. We make our headgear− which is called a 'capo'− from bamboo. We have a way of sticking paper on it and painting it in nice colours…

"The basic dress code is to wear bigger clothes than normal to disguise your identity. We would dance to a beat, to drums. There is a line. . .

"We always try to maintain the line and there is a leader in the line. Bann Mové is something that is in the roots of Colihaut," says Ray Charles, a Bann Mové dancer.

His cousin, Nicholas George is a longtime member of the Bann Mové organising committee. He added that the mask was originally made from clay and, prior to that, goatskin.

"You design a face in a mould of clay and then you would use starch…you spread the starch around the clay and then…you use newspaper and you paste it on that mould," George said.

He explained that freshly made masks were left in the sun to dry, which would harden the clay and seal the design.

"You had fellows who would be able to design the mask face by looking at you. Nowadays some are using plastic masks. But in the past you made your own masks," George said.

George noted that the drum used is the lapo kabwit or goatskin drums. "Fellows would bring their skills and experience into play and tell you which goatskin is best for the drum," George said.

There are three phases of Bann Mové. The young children come out from 9:00am, followed by the teenagers from 11:00am and the adults from 1:00pm.

"When you put on the mask, is what comes out…" Charles said, explaining that the rhythm of the drums brings out the rhythm in the dancers.

All dancers follow the leader − the most dynamic dancer in the group – dancing in a line formation.

"The good leader adds his flair, so every carnival the people may look out for a particular leader because of his antics," George said.

"When the drum starts to play and you are dressed in that garb, it brings out from you that which you believe you didn't have," Charles said.

"When the drum is played, you feel it like a sensation in your heart…it's in our blood…" Charles added.

Reveling in line formation and strictly maintaining this line of dancers is another unique feature of Bann Mové, George said.

There is also an element of mystery as people try to figure out who the costumed dancers are.

The villagers are further confounded because the dancers change costumes after a while. George said Bann Mové has a unique dance and drum beat.

Charles explained that "roll" is when the beat is drawn-out and the people urge dancers to make rolling movements. When they say break, it's for them to slow down.

"At all times you keep to the rhythm although you are adding variations and the crowd gets excited, eggs you, encourages you because they are feeling the rhythm."

For the "breaks", the leader will get as low to the surface of the road as possible and continue dancing while the rest of the group follows.

"Then he will go past the drummers and then rise and come back with a flair …" George said.

The situation had a bearing on their practice sessions as there was some uncertainty about their participation.

One of the changes in Bann Mové is that women are now incorporated.

Mové' means 'bad' in French Creole and in the early days there was a bad part of it.

Charles and George said that long ago some group members took advantage of the disguise to misbehave.

Charles said his grandmother told him that people were once afraid of Bann Mové and would look at the performance from inside their homes.

But this has been one of the positive changes to Bann Mové. These days, thanks to organisers' zero-tolerance for violence, it's strictly a cultural extravaganza.

In recent times, some of the villagers formed a group called the Gladiators Incorporated, which has added theatrics and other entertainment to the village's carnival festivities.

However, the group joins the Bann Mové after their performances.