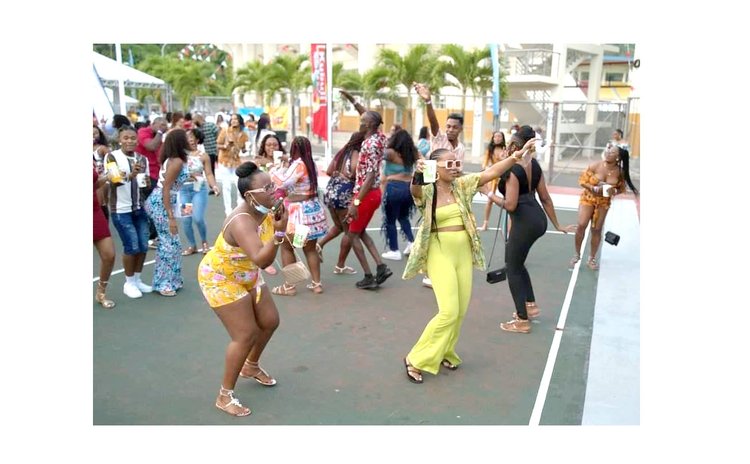 When carnival lover Noah Smith heard of the announcement of the special entertainment events which officially kicked off this past weekend, he thought it was the start of a return to normalcy after almost two years of isolation.

"There was so much pent-up excitement, being the first major thing back," he says. But a lot has changed since the news of the return of the vaccinated fete, and now, the die-hard 'sewo lover' says, "there's a lot of fear countering that."

According to Smith, having personally witnessed what his mother, a health worker for 16 years, went through within the past 24 months, attending these events and possibly spreading the virus to other members of his family is a risk he is not willing to take.

This weekend, hundreds of festival-goers swept into the Windsor Park Sports Stadium amid a spike as the now replaced carnival events got underway.

The sight was striking as leading up to the activities- which can only be attended by fully vaccinated patrons- Dominica's COVID-19 daily case rate was double what it was a few months ago.

Among those most concerned are the health care workers' who fear that with the other events still scheduled for the next few days, the worst is yet to come.

"I think it has the makings [of super-spreader events]," one health care worker stated to the Sun. "When you have up to 500 people who are in a fairly enclosed space and there's no social distance, the vast majority are drunk, so it's likely they will remove their mask at one point in time, you are going to get some transmission of the virus."

Nurse Davidson, who has personally witnessed countless patients gasp for air on the ventilators is of the view that anyone who attends these events is "in denial of everything we've been through the last two years."

"It's almost acting like the pandemic never happened and the virus will magically go away. I don't see how these activities could meet those criteria of slowing the spread of this virus," she stated.

At this point in the pandemic, where Dominica reached the grim figure of over 1000 cases in the past few weeks, Davidson said the only safe way to hold these large events would be to do it virtually.

A senior public health official who also spoke to the Sun on the usual condition of anonymity called the activities "a recipe for disaster" even with all the COVID-19 protocols established by the government.

"While it is true that those in attendance will be required to present a negative antigen test and they must be vaccinated, that doesn't mean that those activities will not be a breeding ground for the virus," she lamented

"We have to remember that there will be some people in the mix who will be in the incubation stage, others who will get a false negative- because its technology and we see a lot of that happening and there will be many who so with all of these people cramped up in this small space, it is likely that the virus will only double, if not triple in the upcoming weeks," the Sun was further told.

While it's too soon to say whether these activities will go down as a super-spreader event, health experts warn such large-scale gatherings will add fuel to the outbreak. "What's done is done. Hopefully, now we'll escape the worst of it. Time will tell whether or not this should be a cautionary tale," the health expert cautioned.

The government of Dominica has given the green light for the staging of over ten carnival events which will occur from February 20 to March 1. These events officials have said will be open only to fully vaccinated patrons and will be held at two approved venues, the Windsor Park Sports Stadium will be designated as the main event venue and will accommodate a maximum of 500 patrons and the Old Mill Cultural Centre which has been approved for virtual events and cater for up to 200 patrons.