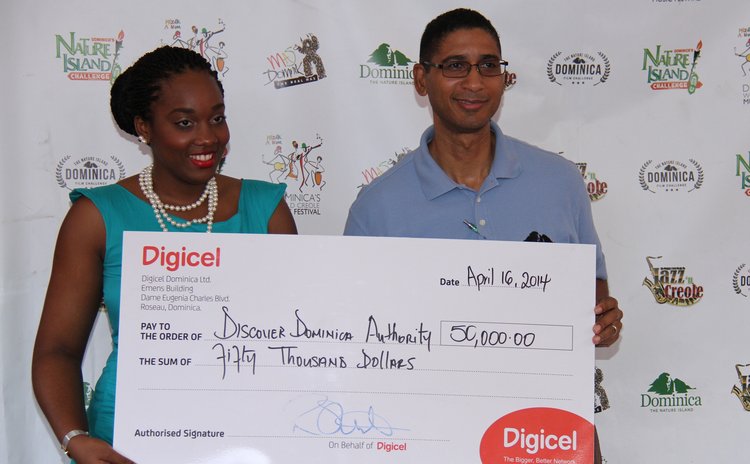 Clavia Timothy of Digicel and Collin Piper of DDA

Robin contributed $5,500 which will go towards Floissac's evening wear, swim wear and costume.

Robin made the presentation at a press conference at the Dominica Festivals Commission on January 20.

"I feel privilege to sponsor Tasia Floissac as a driven individual who is highly motivated in accomplishing her goals and dreams with a fighting spirit to succeed in whatever she does," said Robin.

He noted that she represents some of the important elements of what is taught at the Universal Martial Arts Academy.

"I also feel honoured to support and develop our culture here in Dominica today," he said.

In addition, Tasia Floissac said that the call for sponsorship towards the queen pageant has been loud and clear on the airways and is thankful for Sensei Robin for answering that call.

"I think one of the greatest gifts that one can possess is one of gratitude and I would just really like to thank you from the bottom of my heart for giving me this stimulus or impetus to contribute fully to carnival this year," said Floissac.

Meanwhile, Chairman of Dominica Festival Commission (DFC) Colin Piper said although there has been ample discussion regarding sponsorship however, he wants to assure the public that carnival is going to happen.

He noted that there is a budget for carnival but he made the plea for the private sector assistance to forge partnerships for this year's carnival events.

"We have the budget to make sure that the shows happen we just went out with a plea to the private sector because we believe that they are the beneficiaries of all of what carnival has to offer and we want them to partner with us as we plan for carnival as we stage carnival," he said.

In addition, he said there is indeed a sponsor for the National Queen Pageant however, that said sponsor wishes to remain anonymous.

He noted that planning for the pageant is full stream and there is no fear for preparations of the event.

"So private sector is in fact stepping up and we wish we were in a position to divulge who that is, it is important for the public to know that the queen show is in fact getting support," he said.