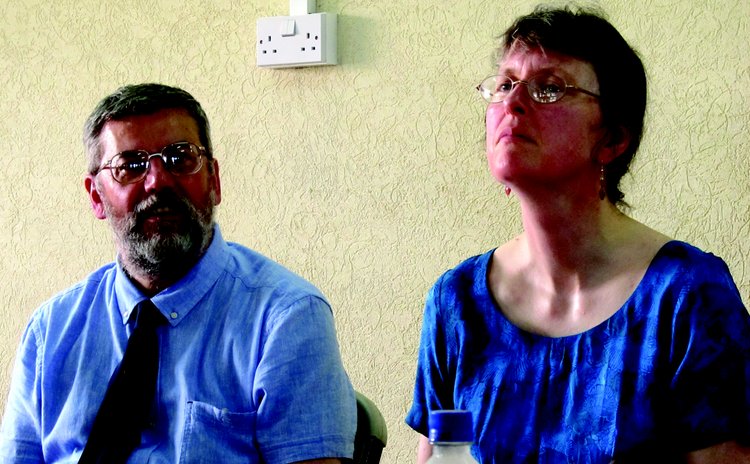 More than 200 Catholic catechists from across Dominica gathered at the Goodwill Parish Hall on Saturday May 11, 2013 to examine the relationship between the history of salvation and Pedagogy of God (God's way of teaching) and the Catechism of the Catholic Church (CCC) as part of that pedagogy.

The Catechists also got a bit of an insight into the Catechism on the teaching of the Church on the family, and a talk on "Marriage and the Family."

Leading the discussions was Francis Etherege, Director of Studies on the Catechism of the Catholic Church at Maryvale Institute, Birmingham, England. He was accompanied by his wife Catherine.

His Lordship Bishop Gabriel Malzaire was one of four clergymen present. Bishop Malzaire explained that he and the Director of the Catechetical Centre, Noeliva

Leblanc had visited Maryvale Institute in October 2011. After the experience they needed to share the information acquired to a wider audience; hence, this gathering of catechists from the Diocese of Roseau, which would in part partially fulfil two of the pastoral recommendations for "The Year of Faith" on the note from the Congregation for the Doctrine of the Faith issued on January 6, 2012 by the Catholic Church.

Etheredge, who became head of Maryvale Institute last November, began his discussion by quoting one of the most famous bible verses in the New Testament: John 3:16, summarized thus: "God is Love." Etheredge told his listeners that the goal of God's communication is love, even in the face of what is perceived as tragedy and trials. We should see tragedy as God trying to sanctify us, he said. The Saviour of the world had to go through these trials, and we are not exempt, and hence come the triumphs and the trials. Etheredge made the oft overlooked connection between the sacrifice of Abel, the lamb he presented as the first pleasing sacrifice to God. That lamb becomes the "Lamb of God" as inspired by John the Baptiste, the Innocent One.

Etheredge noted the lamb of Abel as visible and which becomes invisible in the Risen Christ or and the natural to the supernatural. And all of that began with creation: the wonder of man, male and female made in the likeness of God, and the marriage fulfilled in time in the marriage of the Lamb to His Church; God and his people.

God does not cease to express himself in deeds, continued Etheredge. He leaves traces of His history in the revelation of His Son Jesus Christ; the coherence between all of these, a coherence which brings us back to the majesty of God.

He described the CCC as a gift for our times because of the people, and the vices who need it. The CCC is in four parts comprising of several sections with hosts of biblical referencing and cross referencing to the Bible and Church documents.

Catherine Etheredge and her husband are the parents of eight children between six months and 15 years old. She shared a bit on how she and her husband cope with their family. Etheredge gave an example of how all 10 of them went to Rome without the resources and how God made it work out.

The catechists were left with much to ponder, much to research and study and much more to be done for their God. By Morris Cyrille.