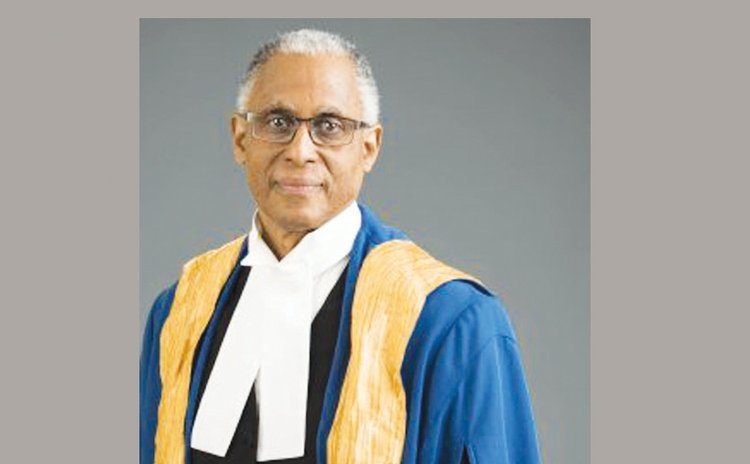 The Honourable Justice Adrian Saunders, president of the Caribbean Court of Justice (CCJ)

Though the United Workers Party (UWP) has failed in its attempts to adjudicate claims that Dominica's 2019 election was invalid, at all courts at their disposal, the party says it is undaunted as the last ruling of the Caribbean Court of Justice (CCJ) exposed the illegitimacy of the incumbent government.

Dominica's parliamentary opposition leader, Lennox Linton, in his reaction to the decision of the Trinidad and Tobago's based CCJ, to strike out the UWP petitions challenging the election results in ten constituencies declared that although the petitioners lost, the taints of Dominica's last general election were exposed.

In its ruling on July 6, 2022, the apex court for the region agreed with the Court of Appeal that the Petitioners had no right to appeal the decision of the High Court judge, Justice Raulston Glasgow, to strike out their petitions hence the CCJ dismissed the application filed by members of the party in the case of Cuffy and Others v Skerrit and Others.

In a judgment authored by CCJ President Justice Saunders, the Court held that in order to determine what is a final decision in ss 40(6) and (7), one must look at the meaning, aim, history, rationale, and context of those constitutional sub-sections.

The CCJ found that the trial judge did not determine the merits of the petitions, meaning that Justice Glasglow did not reach the stage where he would have determined the question of whether a candidate was validly elected or not. Instead, he struck out the petitions on procedural grounds. Accordingly, the decision of the trial judge was not final, but interlocutory.

The Court disagreed with the Petitioners' argument that their appeal should be heard in light of the importance of the petitions.

Right to a fair hearing

The CCJ further noted, however, that the Constitution guarantees every person in Dominica the right to a fair hearing within a reasonable time by an independent and impartial tribunal. Therefore, if a Petitioner complains at a stage before the trial of their petition (an interlocutory stage), that their right to a fair hearing has been violated, then the Court of Appeal should assume the authority to hear that complaint. Nevertheless, the CCJ took the view that in this case, no issue arose as to whether the Petitioners had not received a fair hearing.

Justice Jamadar in his concurring judgment found that the right to be registered to vote is at the heart of free and fair elections which he says is part of the "basic deep structure of Dominican constitutionalism."

A complaint that appeared in most of the petitions was that the election officials failed to use the revised annual list and supplementary register as required by law. The trial judge acknowledged the clear failure to follow that law. Justice Jamadar found that on constitutional grounds, the Court of Appeal arguably may have had jurisdiction to hear the appeal, irrespective of whether the decision was considered to be final or not. However, except for what he called " this small nuance," he basically agreed with the Court's decision.

Consequently, the CCJ refused the application for special leave and thus upheld the orders of the Court of Appeal. No order as to costs was made, since the CCJ considered that efforts by the citizenry, in good faith, to call attention to perceived deficiencies in the electoral process, should not be discouraged.

In a statement following the judgment, the opposition leader said the ruling is an indication that the judicial system is ill-equipped to deal with violations of the constitutional rule of law provisions for the electoral process that is supposed to guarantee free and fair elections.

"The CCJ agreed, even though the strikeout of the pleadings altogether deprived the petitioners entirely of the constitutional right to a fair trial by an independent and impartial tribunal, which, according to the CCJ, gave the appeal court separate grounds for jurisdiction to hear the appeal, but no problem, so no remedy," Linton said.

He further posited that the CCJ in their ruling said that the claims in the petition, if true, were troubling and it hoped that the relevant authorities would seriously reflect on the claims of illegalities and irregularities that tainted the 2019 election and consider steps to improve the elections machinery so that as far as possible, such claims will not arise in the future.

"The petitioners came to court to establish the truth of their claims. The court dismissed them in violation of their constitutional right to a fair trial by an independent and impartial tribunal within a reasonable time. But no problem, so no remedy," Linton stated.

"So the petitioners lost, but you know what, the people won," Linton declared. "The people whose electoral process has been tainted, and whose elections have been stolen with illegalities and irregularities over the past two decades, won a major victory in this very same defeat of the 2019 election petitions indeed."

According to Linton, the judgment is a clear signal from the court to the people of Dominica, that there should be no more general elections in Dominica without electoral reform.

Attorney-at-law Zahidha James who was one of the lawyers representing the Petitioners described the ruling as "very positive" for Dominicans.

"We did lose the aspect of our application to go back to the High court to get a full trial but what we won instead, is some for our safeguard which we did not have before for our democracy in Dominica."

She stated that the Petitioners were successful in their quest to receive an acknowledgment from the court that the elections in Dominica were "very bad" and rendered the election a "sham."

"But what I got from the decision…is clear words that we can never again go to an election in Dominica, with the taint of what happened in our last election," she asserted.

"They [the judges] referred to our elections as tainted and they made that unequivocal statement. In my opinion, this suggests that we, in Dominica, have an illegitimate government governing us at this moment in time. Because if this government was elected on a tainted election, to the point that the CCJ had to specifically say that we never do that, again, we do not have a properly elected government in Dominica, that is a fundamental issue that we cannot lose sight of."

James added that the Petitioners did not lose the case on the merits of their argument but insisted that the court's hands were tied given Dominica's constitution.

However, Senior Counsel (SC) Anthony Astaphan, who led a battery of lawyers in the matter, described the decision of the court as "very important."

He further asserted that the petitions filed after the 2019 general elections are "dead as are the election petitions filed in 2005, 2009 and the criminal complaints that were filed in the Magistrate's Court…all of which are now dead as a result of the decision by the CCJ".