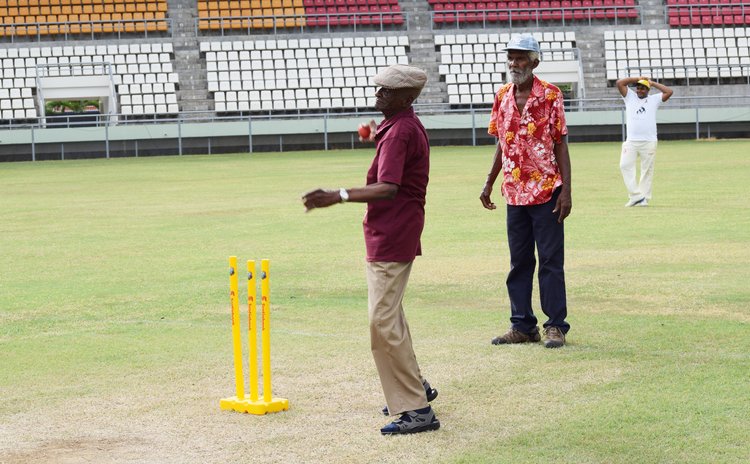 At a T20 cricket match at the Windsor Park Sports Stadium on Sunday, 25 September, a DBS Dream Team defeated a Dominica Council on Ageing (DCOA) team. (Scores: DBS 119 for 6 and the DCOA 54 all out).

This was a main event of a DCOA-organised Month of the Elderly activity.

At the end, the Big Edge Financial trophy was presented by the President of the DCOA, Zetma Toussaint, to Cecil Joseph Captain of the DBS team.

The day was part of the DCOA's annual activities commemorating the Month of the Elderly and it involved a rally of elderly groups from all over the island.

Before the match, the rally was addressed by the President of the DCOA and Minister of Youth and Sports Justina Charles who deputized for the Minister for Social Services Catherine Daniel.

Dr. Sam Christian was the featured speaker who spoke to the gathering about ageing and healthy life style.

The rally was entertained with performances from Rah Peters who teamed up with Ophelia Marie and Jeff Joseph. Other performers included Damaze from Castle Bruce and the Campbell Jing Ping Band. The reigning Carnival Queen, Tassia Flossaic and her team assisted with the day's event as well as the Government of the Dominica and the corporate citizenry.

The Month of the Elderly runs from September 1 to October 1st. The United Nations has declared that 1st October is to be observed as International Day of Older Persons under the theme "Building Age-friendly Communities."