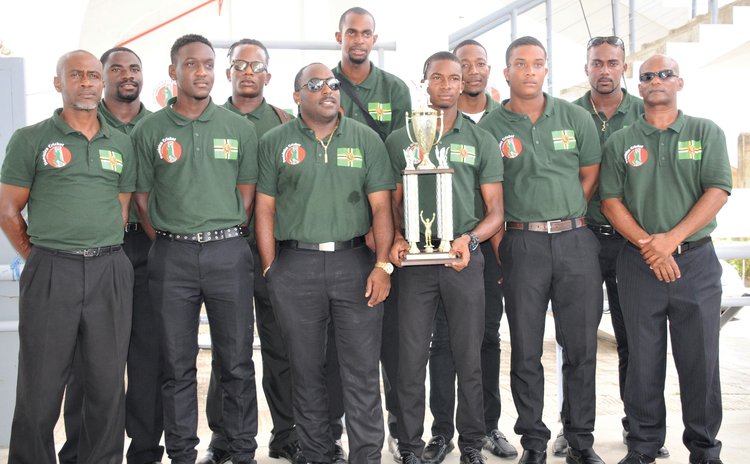 With a 14-run victory over archrivals St. Vincent and the Grenadines to win the 2018 Windward Islands cricket tournament, Dominica's youthful cricket team came home to a hero's welcome last Friday.

"This is our pride and joy," said a delighted Andy Matthew, the treasurer of the Dominica Cricket Association (DCA) at a reception held at the Windsor Park Stadium for the new champs of Windwards cricket. "You should no doubt celebrate as a team but the greater celebration is for us as a nation, as a people."

Saying that the team's success in the limited over tournament was a demonstration of Dominica's resilience after the island received a battering from Hurricane Maria, a category five hurricane that slammed into the island on 18 September 2017 Matthew said the team overcame a number of challenges.

"This championship speaks volumes to our new national slogan that we are a resilient people," Matthew said. "Cricket was spared no mercy by Hurricane Maria; cricket suffered the same fate as the entire country".

Dominica's cricket major ground, the Windsor Park Sports Stadium bore damages valued at EC$6 million; the pavilion at the other major ground in Roseau, the Botanic Gardens, is still covered by tarpaulin; and cricketers all over the island lost homes, friends and pads, bats and other cricket gear. But most significantly there's the trauma of surviving a major storm.

"We have our captain Tyron Theophille who hails from the hardest hit communities, Pointe Michel," said Matthew. "The pain and grief suffered because of loss of life would have hit close to home for him."

Alick Athanaze, Dominica's new young cricketing hero was also affected by Maria but the storm seems to have had a positive impact on his ability to score runs.

Following up on his success at the Youth Cricket World Cup, the Regional Super 50 tournament, Athanaze scored Dominica's only century at the Windwards tournament.

"Well done to you Alick," said Matthew. "We will continue to follow your progress with high expectations for the future".

With senior players such as former captain Liam Sebastian "continuing to display statesmanship", Matthew said the Dominica men's senior cricket team is actually being carried on the shoulders of young cricketers.

"You are our hope and our future," he said.

During the tournament, Dominica played three matches in four days, a bruising ordeal that Coach Mervin Thomas said tested the resolve of the team.

"Even before we left the island the commitment was to do it for Dominica," Thomas said.

Dominica vs St Vincent & The Grenadines