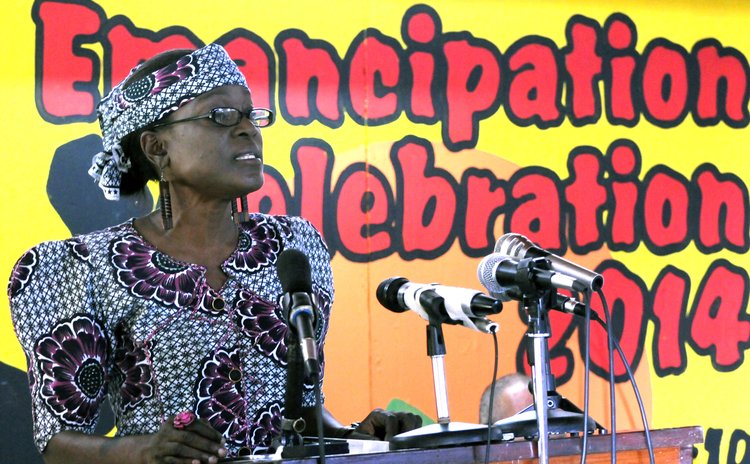 This year's Emancipation Day activities include "an historic walk starting from the Barracoon building to the Dame Eugenia Charles Boulevard to the Cruise Ship berth where flowers will be scattered to commemorate those who died during the Atlantic Middle Passage. From there the walk proceeds to the Roseau Market for a short address and libation and then to the Emancipation Monument and Peebles Park for a special ceremony and concert," said Jacintha David , the Acting Chief Cultural Officer at the media launch of Emancipation at the Old Mill Cultural centre last week .

"It is a celebration of freedom, a celebration of the struggle of our ancestors, the maroons and others to abolish slavery. It is an occasion to pay tribute to those who gave up their lives in that struggle and to those who died during the Atlantic crossing and as a result of inhumane conditions and brutality of slavery."

Other highlights of the event include the annual Emancipation Hike; the usual Golden Drum Awards during which groups or institutions that have made a great contribution to the art and culture spanning more than twenty years are honoured with awards; and the Emancipation Lecture.

"This year, the event will take the form of a panel discussion and is being hosted by the National Reparations Committee. The discussion will focus on the reparations issue," David said.

"This year's hike is along Segment 5 of the Waitukubuli National Trail and is being coordinated by the Division of Culture and the Heart of Dominica Community Tourism Group. The hike starts at Fomelle and proceeds via the Emerald Pool and ends in Pond Casse," she said.

Grand Bay is expected to hold a community event August 2nd, organized by the Heritage Committee and will involve artistic performances in tribute to community and national heroic figures.

One of the most important activities is the Nature Island Literary Festival and Book Fair (NILF&BF) from August 8 - 10.

Now into its sixth year, NILF&BF is one of the most successful in the region in terms of standard and quality of presentations, attendance, programme, format and community outreach.

It boasts a varied programme including lectures, panel discussions, workshops, book fair, performances by local and regional poets, writers, musicians and cultural groups Some of the foremost literary personalities in the Caribbean region and beyond have presented their work and conducted workshops at the festival. These include Derek Walcott (Nobel Laureate), George Lamming and Earl Lovelace among others.

This year, the festival runs from August 8-10 and the focus is Caribbean theatre.

"We have in store an extremely new and different package," Said Dr. Alwin Bully, the main organizer.

"I'm one who believes that festivals need to change their styles, their formats, the festival's face, so to speak, every five years. I think people get bored with the same format," Dr. Bully said.

Programme highlights for the 2014 NILF&BF include full-length performances of classic Caribbean plays while established playwrights, screen writers, directors, and actors from the Caribbean and beyond will make presentations on their work on stage and screen. Six iconic Caribbean playwrights will be honoured as part of the festival. The festival is organized by the NILF Committee. The main festival venue is the UWI Open Campus.