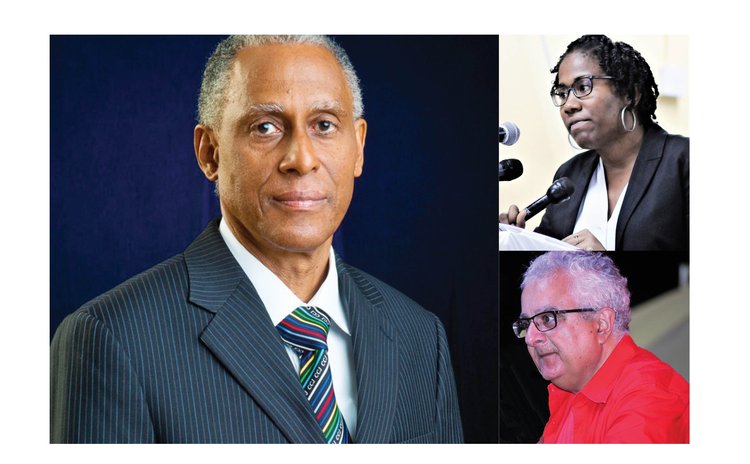 Anthony "Tony" Astaphan SC has told the Caribbean Court of Justice (CCJ) that there would be "chaos" and massive disruptions in Dominica if members of a sitting cabinet are dragged before a magistrate court.

"The consequences on an elected parliament if the majority judgement (is) correct the uncertainty that would affect our democracies and our constitutional rule of government are mindboggling," said Astaphan. "It would make a mockery of the government if ever so often the entire cabinet is marching to the magistrate court to await a conviction."

Astaphan represented members of the ruling Dominica Labour Party (DLP) via ZOOM last week at the CCJ in the landmark case: "Roosevelt Skerrit and Ors. v Antoine Defoe and Ors."

But Cara Shillingford, who represented Antoine Defoe and the other litigants, argued before the judges of the CCJ that there is no obligation under Dominica's laws to file either election petitions in the High Court or criminal charges for election crimes in the magistrate's court.

"It is an option that is available to the electors," she said. "Another option which is available is the filing of criminal complaints".

The problem is, if criminal complaints are filed before a magistrate there is a real chance that parliamentarians accused of the criminal act of treating could be fined, confined and banned for seven years from contesting any election, local or national.

Astaphan suggested in his arguments before the CCJ on Thursday that Antoine Defoe and the others who filed the original charge were politically motivated. He further alleged that Lennox Linton, the Leader of the Opposition, has deliberately taken the route of criminal charges through the magistrate court instead of filing election petitions.

"The Leader of the Opposition cannot tell people what jurisdictions he wants," Astaphan said. "He cannot say that he's not filling election petitions, instead he's going to file criminal complaints in the Magistrate's Court some five months after the election."

If the CCJ agrees with ECSC in its majority decision, then the matter will return to the Magistrate's Court where there's always a chance that all 15 ministers and ex-ministers may be found guilty of treating. And that's what Astaphan and the appellants in that case are trying to avoid.

But observers say they believe that the CCJ judges, who, on Thursday, reserved their decisions, have, by their questioning, indicated that the case will eventually be heard by a magistrate.

Questions of equality under law

For instance, CCJ President, The Honourable Mr. Justice Adrian Saunders said that the offence of treating had nothing "intrinsically to do with disqualification because it is an offence that can be committed by any person and the penalty for the offence is fine and imprisonment."

Justice Saunders asked: how could a court justify trying a disc jockey, for example, criminally who has been charged with treating yet give a member of parliament a "free pass".

Astaphan argued that the words "a free pass" were discriminatory and was not the intention of legislators.

Another Judge, The Honourable Mr. Justice Andrew Burgess asked: what does the words "every person" in Section 58 of the election laws, the section at the heart of the charge, mean and doesn't "every person mean what it ordinarily mean?"

Astaphan submitted that there were discrepancies and contradictions in the law that gives the High Court jurisdiction over election disputes through election petitions but magistrates were given the authority to adjudicate on election criminal conduct.

He revealed that that's an issue that Sir Dennis Byron the contracted consultant on electoral reform is to look into.

"The former president, Sir Dennis Byron has been asked to conduct public hearings on electoral reform," Astaphan told the CCJ. "I can assure your honour that these are all issues that are going to come up within the province of recommendations to the parliament. That why we see this as a requirement for legislative reform not for judicial engineering."

How the case began

This contentious case began after the Dominica Labour Party (DLP) won the 2014 general elections by grabbing 15 of the 21 seats; the United Workers Party (UWP) won six.

After the poll, in May 2015, UWP supporters Mervin Jno Baptiste, Antoine Defoe and Edincot St. Valle, filed criminal complaints against DLP candidates for treating in the run-up to the election.

In his complaint Mervin Jno Baptiste alleged that government ministers worked together to corruptly, directly and/or indirectly influence the results of the poll.

He pointed to two free concerts, one featuring three-time Grammy Award winner and international gospel star, Donny McClurkin, and the other by Jamaican Reggae group, Morgan Heritage, that the DLP allegedly used to "corruptly influence" the outcome of the election. He said that this was in contravention of Section 56 A of the House of Assembly Elections Act.

The matter was then taken to a magistrate in Roseau who issued summons to the ministers named in the case.

On behalf of his clients, Astaphan filed a judicial review claim in which he sought to squash the complaints of Jno Baptiste and others. He argued that the summons issued by the magistrate did not disclose an offence under Section 56 of the Elections Act. He further argued that the complaints were time-barred since they were filed after the 21-days limitation period for the filing of Election Petitions. And he contended that the magistrate acted in excess of his jurisdiction when he issued the summons. After Judge Bernie Stephenson heard the judicial review claim, she agreed with Astaphan.

In her judgment, Judge Stephenson said the magistrate who signed the summons erred in law.

In her 20-page decision, Justice Stephenson said where the House of Assembly Elections Act (HOAE) Act makes reference to "summary conviction" for the offence of treating which would mean the complaint is to be heard by the Magistrate, is in conflict with section 40 (1) of the Constitution which provides that any question regarding the election of a candidate to the House of Assembly must be dealt with by the High Court and that this must be done by way of election petition which are subject to very strict rules and procedure, including the requirement that the complaint must be brought within 21 days of the election.

Judges of the ECSC heard the matter in early October 2019 and reserved their decision. At the hearing before the ECSC, Shillingford told the court that the Section 59 of the House of Assembly Elections Act is "clear and unambiguous. Treating is a summary offence and the learned Magistrate had proper jurisdiction to issue the summons."

She added that what the individuals are charged with is "an election offence" and cannot fall under an "election petition."

"They are not above the law…the law must apply to everyone equally," she said.

"The Magistrate has no jurisdiction to deal with election matters…they are also not ordinary citizens and have to be treated differently," Astaphan SC said.

Astaphan maintained that the matter ought to have gone to the "High Court" through an "Election Petition and the appellant's view that the Learned Magistrate has jurisdiction was wrong".