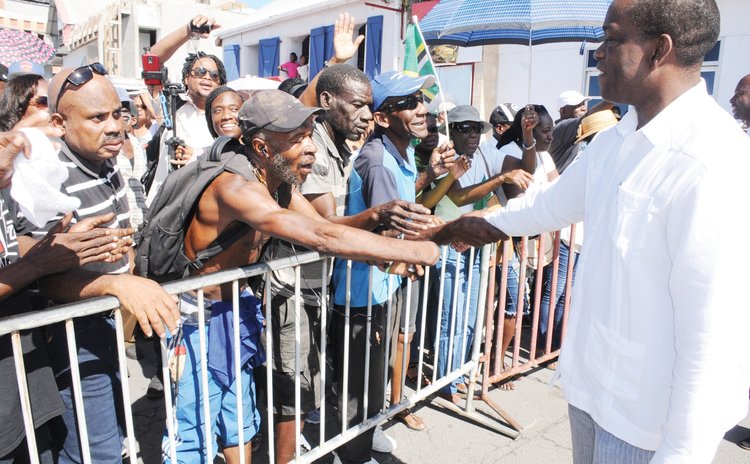 UWP supporters and their party leader at the Bayfront, Roseau

Law and order appeared to be a thing of the past in the Roseau Magistrate court when the incitement matter involving Opposition Leader Lennox Linton came for a hearing. Linton's attorney Gildon Richards asked to leave the court and Linton barely escaped an arrest.

On the morning of July 27, 2021, Linton along with Richards appeared before Magistrate Michael Laudat for a matter which dates back to 2017.

It is alleged that between January 22, 2017, and February 7, 2017, Linton unlawfully incited people…and jeopardized the public safety order and public peace following a public meeting on Kennedy Avenue, Roseau near Government Headquarters on February 7, 2017, calling for the resignation of Prime Minister Roosevelt Skerrit, contrary to law.

Following the meeting, a number of business places in the city were vandalized.

Former Prime Minister Edison James, along with former United Workers Party (UWP) Senator Thompson Fountain were also charged with incitement whilst former Roseau South MP and deputy leader of the opposition UWP, Joshua Francis, Nicholas George, and now Speaker of the House Joseph Isaac was charged with obstruction of justice but the matter has since been adjourned sine die.

The prosecution's case, which comprises 75 witnesses, was last heard in 2019 before Magistrate Asquith Riviere. However, Magistrate Riviere has since retired and the case must be restarted before another magistrate.

At the hearing on July 27, Magistrate Laudat stated he had received correspondence from Trinidadian Senior Counsel (SC), Israel Khan, who is representing the Police in the matter that he was unable to travel to Dominica due to the pandemic and as such sought an adjournment.

Richards then stated that the matter should be discontinued as it has been before the court for four years with little progress made.

Magistrate Laudat then informed the attorney that he must first apologize to the court for statements made at a previous hearing if he wished to continue to address the court.

Adamant that he had not disrespected the court as implied by the Magistrate, Richards demanded an explanation as to what exactly the Magistrate was seeking an apology for.

Both resolute on their stance, Magistrate Laudat adjourned the matter to 2:00 p.m. the same day but instructed the court crier that Richards should only be allowed back in court if he apologies.

When the matter resumed later that day, Magistrate Laudat was still in search of an apology from Richards which he refused to give.

Magistrate Laudat then asked the attorney to leave the court which he rejected and continued to demand an explanation for what the Magistrate was seeking an apology for.

An order was then given to the Police officers in court to remove the attorney but they too failed to comply with the request as Richards insisted that no officer should "touch" him.

Clearly upset, Magistrate Laudat reprimanded the Officers for not following his instructions. The Magistrate stated he does feel safe as the officers in court paid no regard to the order he imposed.

Following a lengthy and heated argument in court, Richards finally budged and agreed to leave the court but informed Linton that he should make no statement in his absence.

Following his departure from the court, the Magistrate who was still irate over what had transpired continued to reprimand the officers for their lack of action and also the action of the attorney.

Linton, who was in the defendant's dock then stood down, bowed to the Magistrate, and attempted to leave the court.

Magistrate Laudat who became further furious over the "lack of respect" shown to him told the Opposition Leader that should he leave the court, he would be arrested immediately and there was no guarantee that bail would be granted to him on that day.

In that instant, the police officers demanded that Linton returns to the dock which he eventually complied to.

The matter was then adjourned to December 7, 2021, to be heard before Magistrate Pearl Williams.