"Charitable to a fault" 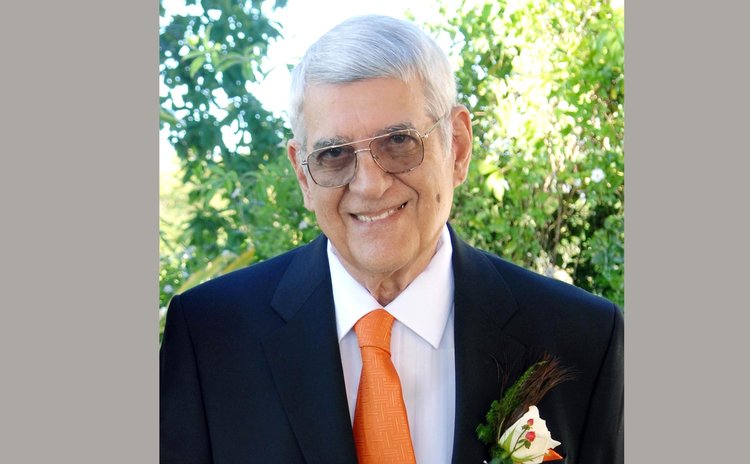 Today, we give all praise and honor to God for a life well-lived.

"They were still living by faith when they died," Scripture tells us. "They did not receive the things promised; they only saw them and welcomed them from a distance, admitting that they were foreigners and strangers on Earth."

The Bible calls us to hope. To persevere and have faith in things not seen.

We are here today to remember a man of God who lived by faith. A man who believed in things not seen. A man who believed there were better days ahead, off in the distance. A man of service who persevered, knowing full well he would not receive all those things he was promised because he believed his efforts would deliver a better life for those who followed.

We are humbled and honored by the outpouring of love shown to us since the passing of our beloved – Louis Nicholas Gabriel. He indeed was a great man. A loving and humble husband, father and grandfather, uncle, brother-in-law, Godfather, and friend.

To my aunt Celia, his beloved wife; to Marisa, his beautiful and loyal daughter, Julien his committed son in law, to his wonderful granddaughters, Zarah, Zuri and Jai whom he adored and his grandsons – Malachi and Nicholas, to all his extended family and friends gathered here today.

James wrote to the believers, "Consider it pure joy, my brothers and sisters, whenever you face trials of many kinds because you know that the testing of your faith produces perseverance. Let perseverance finish its work so that you may be mature and complete, lacking nothing."

It is an honor to be given the privilege to eulogize and pay my respects to my dear Uncle. He was also father to my sister Jenny, Lennox, David, and myself. His Grandnephews, Lendl Luis and Lane will miss him. In our immediate family, Marisa Nicole, Luis, Jai Gabrielle, Zuri Gabrielle, and Nicholas are all named in his honor. Truth be told, he was a father figure to many.

Age allows you to see that time does provide answers. Each is given a path, a table already set. The close bond that my uncle and aunt shared with my parents and by extension their children was the foundation that made, what ought to have been a monumental life-changing decision, to be made without flinching. My siblings and I strive to live exemplary lives mirroring his ways and principles.

My Uncle was a proud Dominican whose faith was tested again and again. It produced a man of pure joy that operated with unbreakable perseverance.

Sadly, the only thing that Uncle will take with him is his generosity. Life does not call on us to emulate his resume; but rather, to emulate his character and his example as a human being. To honor his legacy, it is my wish and hope, that we do more than consign him to the history books. I hope we recommit ourselves to being a nation where the youth are molded by his legacy."

Virtuous and charitable is often how Uncle was described. Father Celsus, in a note to my aunt, said he was "charitable to a fault." There isn't a religious, social, or political institution that did not benefit from his empathy and charity. Uncle rarely, if ever spoke of his philanthropic work. He hated fanfare and notoriety. He never let his left hand know what his right hand was doing. He truly did live scripture. Uncle was particularly faithful in his financial contributions to the Catholic Charismatic Renewal and to the Diocesan Fathers Pension Fund.

He taught us to pray. I remember our evening call to prayer. No one was excused. We knelt around his and aunties bed for nightly prayers. My devotion and admiration of the Blessed mother come from him. He said the rosary countless times a day – even when driving we could hear him mumbling the words while rolling his rosary ring. Those who may recall how narrow the roads to Trafalgar were previously; can well imagine the many accidents we were spared.

Like John the Baptist preparing the way, like those Old Testament prophets speaking truth to kings, Louis Nicholas Gabriel did not hesitate — he kept on persevering. His mission was to make a difference in the lives of those he lived among. The People of the Roseau Valley and in particular the villages of Trafalgar and Silver Lake can attest to that fact. His mission was to bring about change, to improve the lives of his countrymen and especially those in his community.

For Uncle, education was extremely important. At home, he ensured that we all strived to reach our full potential. He was practical and brutally honest. I remember him telling me – Steve your drive will see you through. That made me push even harder. For him, a trade school or academic institution was equally as important. My brother Lennox and Alvin Rolle can attest to that fact. They both became successful professionals and business owners in their respective trades. Marisa, Jenny, David, Jai, and I were not spared. We, along with the achievements of his grandchildren are his success stories. Uncle's push for education did not end at home. Through his company, and often his personal contributions, many school children were sponsored including those of his staff. He would assist with books, school uniforms as well as school fees. In his younger days, Uncle only drove a stick shift pickup. It was to ensure that school students in the Roseau Valley, who would not have had a ride, would be able to get to and from school daily, and on time. On a side note, he is by far the best I know in maneuvering his brakes and clutch to keep the pickup almost stationary – especially on the Carlton Phillip hill as we know it.