Charles: 2014 was most challenging year in AID Bank's history 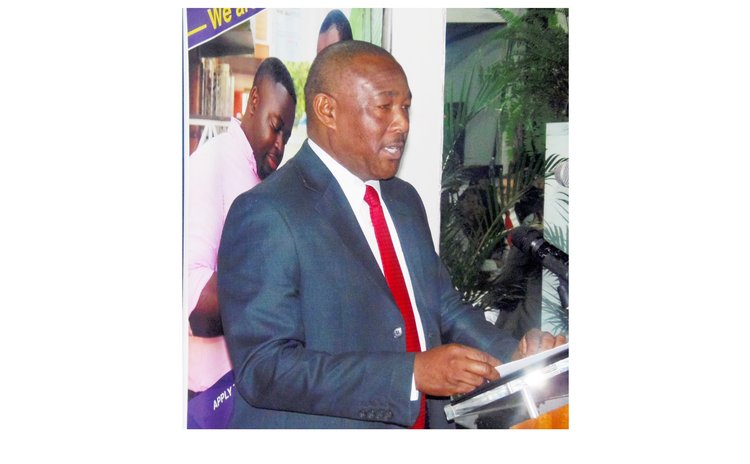 Martin Charles, AIDB Board Chairman speaks at the AGM

"The AID Bank plays an important role in supporting government's growth initiatives. It represents government's active partnership with the private sector in making investments which have the capacity to stimulate and sustain economic growth," said the Chairman of the Board of Directors Martin Charles at the bank's 22nd Annual General Meeting.

The meeting was held on January 28, 2015 at Krazy Kokonuts under the theme "Leading a way to a Sustainable Future".

Charles said though 2014 could be characterized as one of the most challenging years the bank has ever experienced he was pleased to report a cautiously good performance with loan approvals amounting to $26.92 million which was 8.98 per cent higher than the previous years which totalled $24.70 million.

Charles noted: "Of these approvals 53.58% were for economics sector projects reflecting the bank's focus on expanding the economy.

"The bank is also pleased to announce that it recorded a net profit of $1.12 million which grew by 9.85% compared to the restated of $1.03 million in the previous financial year. The quality of the loan portfolio continues to improve with the non-performing loans ratio falling to a new low of 10.72% or 2.56 percentage points lower than the previous year's figure of 13.28%."

Charles then revealed that the bank has completed its three year strategic plan for the years 2014 to 2017 where the plan will focus on sustainable development as being critical to its future and the country.

"Sustainable development requires a new mind set and way of doing things so as to ensure that today's development activities secure a better quality of life for this generation as well as generations to come. The bank recognizes this new direction will require a comprehensive policy, education, action, commitment and time. The new plan also places special emphasis on institutional strengthening and capacity building in order to be able to provide excellent service to our customers," he said. "Other innovations in the strategic plan 2014 to 2017 include new products and services which will be rolled out over the next three years, expansion of our investment portfolio, the transformation of the industrial estates into a modern business park, strengthening the AID Bank, improving on our customer service and continuous improvement of the bank's portfolio."

Meanwhile, Prime Minister Roosevelt Skerrit said: "At a time when the world resources are under such strain that talk of the day is sustainability it is very suiting that the management of AID Bank would choose the theme "Leading the way to a Sustainable Future" for this year's annual general meeting."

Skerrit pointed out that the idea a sustainable future has been the vison of the government which was articulated during the 2014 election campaign.

"Indeed the idea of sustainability is one which has been embraced by the Government of Dominica. The concept of a sustainable future was the vision that the Labour Party articulated during the recent election campaign and which was captured on the cover of our manifesto," said Skerrit. "A sustainable future has been defined in many ways, it has been defined as "as one in which a healthy environment, economic prosperity and social justice are pursued simultaneously to ensure the well-being and quality of life of present and future generations". This is the definition espoused by the Government of Dominica as evidence of the three fold focus of the fourth edition of the growth and social protection strategy."

"Our policy is to support both small and large enterprises or businesses and foster a society with a strong entrepreneurial spirit thus we have put plans in place to aid in the nurturing of that spirit our notable mention is the employment and small business agency which provides assistance to persons looking to set up small businesses," he stated. "Additionally we will continue to support agencies providing services to the poor and neglected as we cannot have a sustainable future if any facet of our population is left to languish in poverty."