Charlo is back: Kalinagos elect a new chief 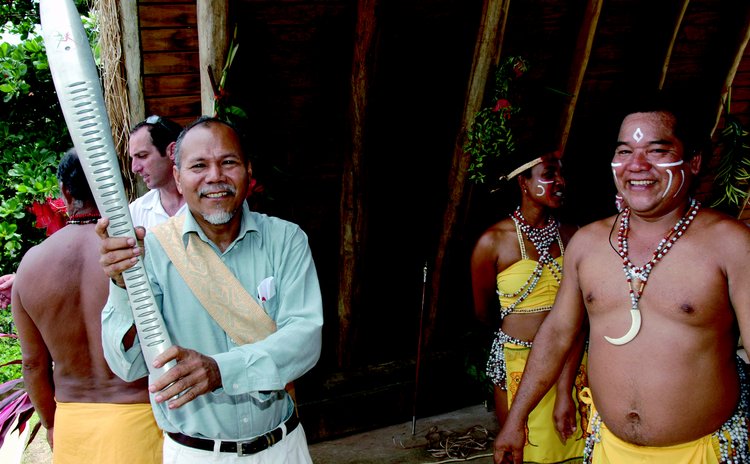 Chief Charles Williams with the Queen's Baton in 2005

Charles Williams, the former Carib Chief who dished Disney and proposed a ban on inter-marriage in the Territory, is now back at the helm of the Carib Council.

In an election on Monday (July 7, 2014) Williams beat two former chiefs and a newcomer to become the new Carib Chief.

"I really did not want to get back in that race but people called me across the Carib Territory. When I realised that there was something serious on the ground, I discussed it at home and we finally decided to give it a go," Williams told DBS radio after the election. "From across the territory there was a strong urge for me to get back on the council".

He added: "I was victorious at the polls and I must congratulate the Carib people and they decided in an election year they wanted Charlo back".

Williams won 316 votes in an election where 41 percent of the electorate turned up at the polling stations. Newcomer Jumadine Frederick received 201 votes; out-going chief Garnet Joseph 198 and former chief, Irvince Auguiste, 81. Though reluctant to outline his programme for the development of the indigenous people of Dominica before he consulted with them, Williams said reparations, as proposed by members of CARICOM, will undoubtedly be on his agenda.

Williams is to serve his second term as chief; he was first elected in 2004 for a five-year term. In 2004, the outspoken Chief shocked the world by standing up to Disney Company, the famous American film-maker, who wanted to film a scene of the movie "Pirates of the Caribbean" showing Caribs engaging in cannibalism. When his council balked and dithered about whether to allow Disney into the Carib Territory, Williams said the decision then belonged to the chief.

"The matter was again raised at the council's statuary meeting on December 29th I as chief explained that we have to understand that we through our ancestors were the ones whom the pirates encountered in the 15th 16th and 17th century when they came, and we were labelled savage cannibals because we stood and fought for our rights, and this is documented in every history book around the world that speaks of the Caribbean history, we are stigmatized up to this day as cannibals, every time that some conflict arises between blacks and Caribs right here in Dominica it is thrown into our faces "we ate the Arawaks but won't be able to eat us blacks," Williams said in a statement issued on February 18th 2005.

"Today Disney wants to popularize that stigma once more, this time through film. And to my amazement councillors whom the people trusted as leaders, councillors who served in the office of Kalinago chief, councillors who have served for several terms as leaders of the people, councillors who took an oath to serve the Kalinago people are betraying their own blood brothers and sisters and rallying them to participate in a film that so unjustly discriminates against us.

"I say shame on them, for a few dollars you all are betraying your own flesh and blood, every year during Carib Week they stand and pledge solidarity messages on community platforms, this one opportunity proves how weak and in genuine we are to our cause to fail to such a small test such as this".

Later in his first term, in May 2008, the BBC and the Associated Press reported that Williams, the Carib Chief was proposing legislation to bar intermarriage in the Carib Territory.

In a story entitled "Love dilemma for Caribbean people" the BBC wrote: "The leader of the last remaining pre-Columbian tribe in the eastern Caribbean says outlawing marriage to outsiders can save Dominica's dwindling indigenous population, but legislators are balking at deciding who can marry whom.

"Chief Charles Williams has proposed a law requiring ethnic Kalinagos to marry only each other for self-preservation. He also requested that foreigners be barred from living on the tribe's 3,800-acre reserve.

"We would like as many Kalinago people to respond and pair off so that we can multiply and protect the race," Williams said during a recent news conference".