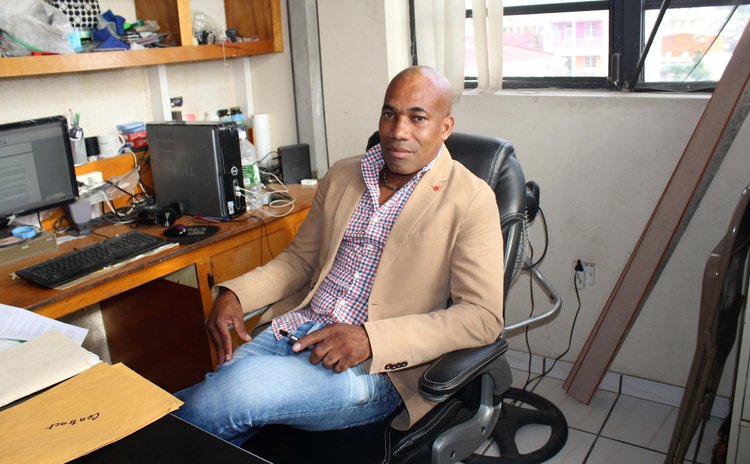 Johnson at work in his office

Trevor Johnson, a Dominica-born Trinidad-based chartered quantity surveyor who has been in Dominica since Hurricane Maria is concern that insurance companies in Dominica are hiring assessors on behalf of the clients. This he says is wrong.

"You are the person who suffered the damage, not them; you get your independent person; you submit your assessments and let the adjustors come and look at it…agree, disagree with the two professionals. Some of the people did not want to pay the money for the assessment (off course you have to pay for it) the insurance company wanted to control the work," Johnson said.

Commenting of conducting assessment, Johnson said there is "a range that you have to work with".

"From what I have seen so far, a lot of people have suffered because they used assessors who did the job because they wanted to make a quick buck they rushed to do a lot of them but they were not done properly.

He continued: "Ninety persons of the number of people that I did valuation for were under insured. No one benefits in that regard. Most, if not all, the insurance companies are reinsured with Lloyds of London so they are not taking all the licks since you spread the risks.

"I have also seen assessors depreciating homes which are recently built (like four years ago etc.) by 25 percent. That should be zero depreciation. It means quarter of the building have cracks and is not good and is falling apart. That is just impossible. How do you justify that? It has to be major structural damage, or the building is located where landslides and the building is already falling apart…that is madness." he said.

Johnson is also questioning the depreciation of properties by the insurance company.

"The Insurance is depreciating your property…I don't understand that because if I am under insured, then I get a penalty but if I am paying the premium for a total loss then why should I be depreciating you," he said. Johnson said he does not foresee litigation against insurance companies since people just want to build their roofs.

"The money is slow in coming from Trinidad and elsewhere and that is the main issue. To rebuild most roofs, the range is between $40,000 and $150,000; roofs are expensive...people want to come out from the tarpaulin and be once again comfortable. The hurricane season is fast approaching again," he said.