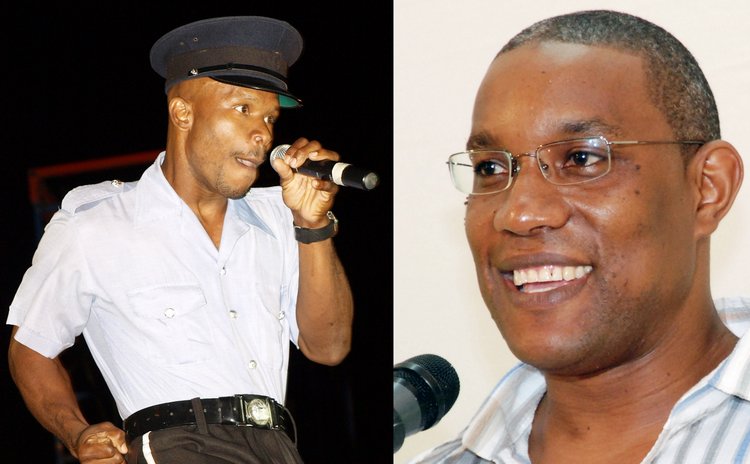 One hundred and thirty thousand dollars is a lot of money to pay for a Calypso-or for any song for that matter- that defames someone.

So, understandably, Checko is wishing the court would check the number of zeros after the comma in that figure (EC$300,000) and then delete one or two.

Realizing that an appeal would not change the decision of the court, Checko's lawyer has asked the Eastern Caribbean Supreme Court (ECSC) to take a look at the $130,000 in damages that High Court had slammed on Checko.

Last week the ECSC gave him until August 22, 2016 to file and serve written submissions in support of his appeal.

Recall that Police Officer Abel "Checko" Jno Baptiste, a calypsonian, was sued by ALBA Ambassador Dr. Philbert Aaron for defamation. Having failed to enter a defence, the high court then awarded $130,000 to Dr. Aaron.

In 2011 Checko had penned a Calypso titled 'Bug Her,' which Dr. Aaron claimed defamed him.

According to a statement in the suit, the song referred to Dr. Aaron by his designation and initial- "Ambassador A."

Justice Errol Thomas then awarded Dr. Aaron $75,000 for general damages, $50,000 for aggravated damages and $5,000 for exemplary damages on account of the remix of the song because of Checko's desire to win the Road March title.

Checko had filed an acknowledgement of service on February 13, 2013 but , unfortunately, he filed no defence within the time prescribed by law.

In his ruling Justice Thomas stated: "The defendant's (Checko) conduct before and after he received the letter from the Claimant's attorney has been noted. But what has not been highlighted is that the defendant offered an apology-not after he received the said letter, but in his witness statement filed on November 25, 2013 for the purposes of assessment of damages."

Through his lawyer Singoalla B. Williams, Checko appealed. Williams told the ECSC that she came into the matter late and she had been trying to reach an amicable settlement with Dr. Aaron but Tropical Storm Erika had adversely hampered their negotiations.

"I ask for an adjournment to the next sitting. We have conceded that we cannot appeal the substantive matter of the case but just the quantum," she told the ECSC Judges.

But Noelize Knight-Didier, (Dr. Aaron's lawyer) told the court that "Erika is used a lot" and as far as she was concerned negotiations in that matter had ended since she had written several letters to the other side.

Since Checko's lawyer had conceded, Knight-Didier asked for cost of EC$800 which was granted and is to be paid by August 8, 2016.

The ECSC gave Checko till August 22, 2016 to file and serve his written submissions; if he fails his appeal will be "dismissed."

Dr. Aaron was also given until September 19, 2016 to respond to Checko's statements, whatever he files.

The hearing of the matter will then be heard at the next sitting of the court of appeal in Dominica during the week of November 7, 2016.