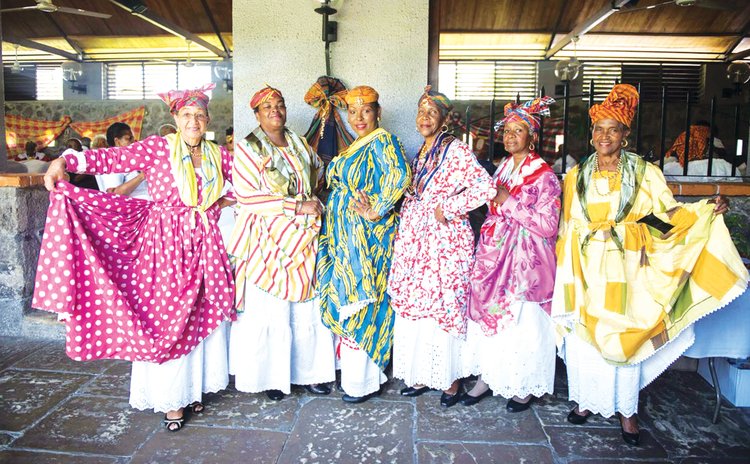 It's a captivating spectacle — women dressed in flowing dresses made with yards of fabric and accentuated with lace and large pieces of jewelry.

This stunning sight is common in Dominica on Creole Day when everyone is encouraged to come out clad in their National Dress. For women, this is either the Jip or the Wob Dwiyet.

However, in recent years it has become apparent that many persons have been losing sight of what is authentic National Wear.

Aileen Burton, whose chief responsibility was research and documentation at the Cultural Division, remarked that the current concept of the National Dress deviates from the time-honoured tradition.

"People have a misconception…They feel that once they use madras, lace and gold, that's fine . . . that's the national dress. But it's is not!" she declared.

Burton, who is also president and cultural custodian of the Roseau Cultural Group (RCG) wants to preserve the genuine National Dress and raise awareness of its value and history.

The Wob Dwiyet can be made with plaid, dotted, plain, floral or madras fabric while various patterns of brightly coloured cotton fabric can be used for the short Jip and a more expensive fabric for the longer one.

Burton believes it is fine to use many variations of the National Dress during the Independence season but urges that the authentic National Dress be worn on Creole Day.

She also frowns on the use of African prints to make the National Dress, noting that this is not the traditional fabric used.

"On [Creole] Day, let us wear our traditional National Dress and not come to the parade with African clothes. . ." she urged, pointing out that "Africans will not use our dress to go to their parades".

Giving a bit of history, Burton said that the Madras fabric often used to make the Wob Dwiyet and sometimes the Jip, originated in India and was first used by the Europeans.

Madras was hand-woven and made from banana leaves before the advent of machines and dyes.

The fabric is made in squares and each square has a particular design with a demarcation line to indicate where it should be cut.

The Wob Dwiyet was observed in Martinique for the first time in 1859 at the inauguration of the Empress Josephine.

But because of laws prohibiting colored people from dressing like White, the Wob Dwiyet only became popular here.

"It was developed by the people of colour…it was not developed by the bourgeoisie… we should honour what the Black women did. They created a masterpiece, which was neither European nor African," Burton said.

This ensemble is accentuated with jewelry, a foula (scarf) of contrasting colour and a headpiece.

"When these women wore their clothes, their Dwiyet, their petticoats were made with a lot of lace and stiffly starched and pleated….so the pleats stood up.

"And they felt so proud of themselves, they felt like queens and they walked with that elegance. This is how the Dwiyet should be worn. It should not be worn in a sloppy manner," Burton declared.

One could hear the rustle of the stiffly starched petticoats and dresses as the women walked by, she remarked.

The Jip is an adaption of the 'Jupe-chemise' in Martinique and is believed to be the first Creole garb developed from African slaves' attire.

Burton is keen to raise public awareness of the National Dress.

"I think we need other activities outside of the Independence period where people can wear their National Dress because . . . we have compartmentalized the wearing of the national dress," Burton suggested.

Further, Burton thinks that all highly-placed Government officials should own a national outfit.

She said the Roseau Cultural Group has developed a five-year cultural revival plan called "Reclaiming our Creole Heritage". This year, the emphasis is on the National Dress.