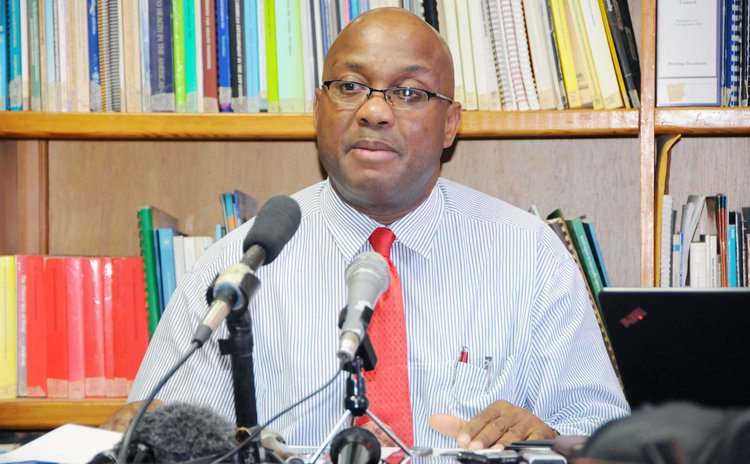 Dominica's first case of Chikungunya was reported in December 2013. Seven months later the number of reported cases has gone well past three thousand. Undoubtedly, Chikungunya is having a crippling effect on productivity in the country.

"Let me say that a lot of persons who are coming down with the disease are not reporting it to the health care services. The Chikungunya is fully entrenched in Dominica, all over the island and therefore we are not testing everybody who present to the health care facilities for the signs and symptoms. Therefore, the numbers that we give is very conservative and does not reflect the true magnitude of the disease in Dominica," Dr. Johnson stated.

He added: "There are a lot of family members with the disease at home and who have not reported to the health facility and so we cannot count these cases. But from the count that we have, I can tell you that reported cases so far are 3, 252 but then I say that this is a very, very conservative number and it is much higher, it is much higher than that."

Dr. Johnson is of the view that leaders need to play a major part in the education process.

"We need all the leaders (religious, political, sports) to be involved in that public education and help us spread the message in the various communities. It is going to be with us for some time. It is affecting our sectors teachers, health workers and is having a major effect on the productive sector on the island," the CMO noted.

But most Caribbean islands are all being affected by the virus disease that is spread by the Aedes aegypti mosquito. According to the latest release on the website of the Pan American Health Organization (PAHO), the number of Chikungunya infections in an ongoing outbreak in the Caribbean region saw another steep rise last week, with the Dominican Republic again accounting for much of the new activity, along with Guadeloupe and Martinique.

"The total number of suspected and confirmed cases rose to 355,617, an increase of 48,780 from the week before", according to PAHO's July 11 update. "Nearly 28,000 of the new cases were reported from the Dominican Republic, while new case numbers were not listed from neighboring Haiti, another outbreak hotspot."

PAHO stated that other areas that contributed sizable parts of last week's increase are "Guadeloupe with 11,600 new cases and Martinique with 8,550."

Elsewhere, PAHO said, the first locally acquired Chikungunya cases have been detected in Trinidad and Tobago, and that the outbreak appears to be spreading to one new country per week, according to the report.

PAHO said the only US territory that saw a notable increase was Puerto Rico, which reported 177 more suspected or confirmed cases for a total of 405 so far.