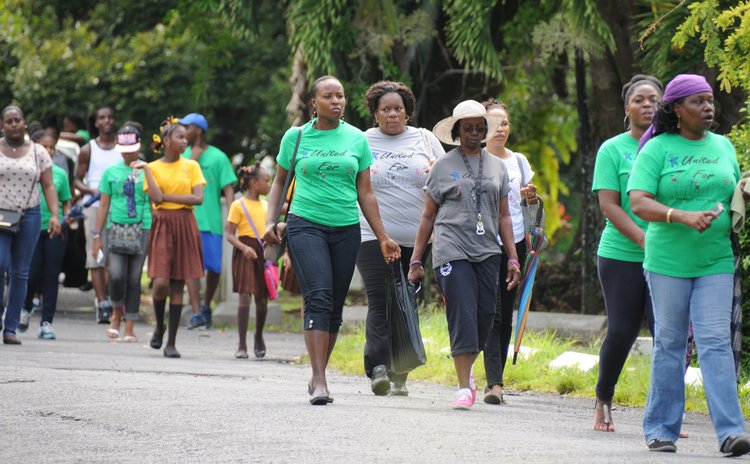 Participants of the solidarity walk against child abuse

There are more loud and persistent calls for urgent action to curb increases in child abuse in Dominica but will those who have ears to hear listen and act?

A clarion is now being issued to policymakers for the implementation of more stringent legislation to curb sexual abuse cases in Dominica, especially against minors.

This comes in the wake of mounting sexual abuse allegations over the past few weeks. On June 2, 2022, a popular entertainer was charged with six sex-related offenses against a minor.

At his court appearance bail was granted to the accused man in the sum of $25,000 and the matter was adjourned to September 29, 2022, for the start of the Preliminary Inquiry.

Two weeks prior, a police officer also appeared before the court on three sex-related charges against a woman while allegations of sexual misconduct have also surfaced against other well-known individuals in Dominica.

Recent statistics from the Social Welfare Division indicate that child abuse cases in Dominica continue to rise at an alarming rate.

The United Nations Convention on the Rights of the Child (CRC) ratified by Dominica in March 1991, gives due consideration to children's rights and according to Dominica's Parliamentary Opposition the United Workers Party (UWP), the incumbent government should ensure that they abide by the four core principles of the Convention, which are non-discrimination, devotion to the best interests of the child, the right to life, survival, and development.

In a statement to the media, the party said that the inordinate delay in bringing these perpetrators to justice allows for an environment where our children can be abused and the abuser faces little or no consequences.

"This serious and horrendous crime against the nation's children calls for urgent action; this affront to humanity and dignity of an innocent must stop. When children as young as two and five years old are violated, then we know that this emergency has reached the crisis level and therefore requires action by all," the release noted.

It added: "Are they not mercilessly tortured by the very system, which is supposed to protect them? Are the authorities serious about juvenile justice, and the provision of a safe haven for the innocent we swore to protect?"

The UWP called for the mechanisms to be put in place to institute a family court, which would allow for due process to be expedited in matters pertaining to the care and protection of children and young people, eliminating the number of cases within the legal system "languishing for over half a decade or more."

"The United Workers Party calls on this Administration to cease the abuse of incumbency, the constantly targeted victimization of its citizens, the inequitable distribution of the State's resources to only a few while so many are left in dire need. This atrocious behavior further compounds the already volatile situation of child abuse, where parents are unable to provide for the children's basic needs leaving these children as prey to perpetrators to continue the cycle of abuse," the party declared.

Meanwhile, vice president of the Dominica Public Service Union (DPSU) Delia Cuffy-Weekes, contends that the issue of child abuse is multifaceted, and requires a unified approach to curb the problem.

"At the end of the day if we just focus a lot more on the victim and the need for prevention rather than cure then we would really begin a massive campaign to open the eyes of society so that they will understand that these things that are swept under the carpet can't stay under the carpet," she said.

For nearly a decade, Cuffy-Weekes has been advocating for the age of consent in Dominica to be raised from 16 to 18 but to no avail.