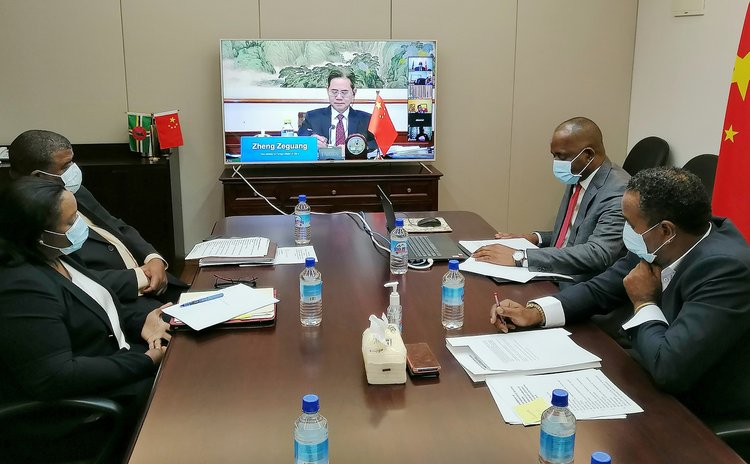 Governments of nine Caribbean countries on Monday, 11 May 2020 held a videoconference with the Republic of China on the issue of COVID-19, a release from the Chinese embassy states.

The meeting was attended by Vice Foreign Minister Zheng Zeguang of the People's Republic of China; from Dominica: Minister of Foreign Affairs, International Business and Diaspora Relations, Kenneth Darroux and Prime Minister Roosevelt Skerrit; government officials from Antigua and Barbuda, Bahamas, Barbados, Grenada, Guyana, Jamaica, the Republic of Suriname and the Republic of Trinidad and Tobago.

The Joint Press Communiqué was released after the meeting.

"The Special Vice-Ministerial Meeting between the Ministries of Foreign Affairs of China and the Caribbean Countries Having Diplomatic Relations With China on COVID-19 was held via video conference on 11 May 2020. Vice Foreign Minister Zheng Zeguang of the People's Republic of China and Minister of Foreign Affairs, International Business and Diaspora Relations Hon. Kenneth Darroux of the Commonwealth of Dominica co-chaired the Meeting. Prime Minister Hon. Roosevelt Skerrit of the Commonwealth of Dominica attended the opening session of the Meeting and delivered remarks.