China and Dominica celebrate 65th anniversary of the formation of China 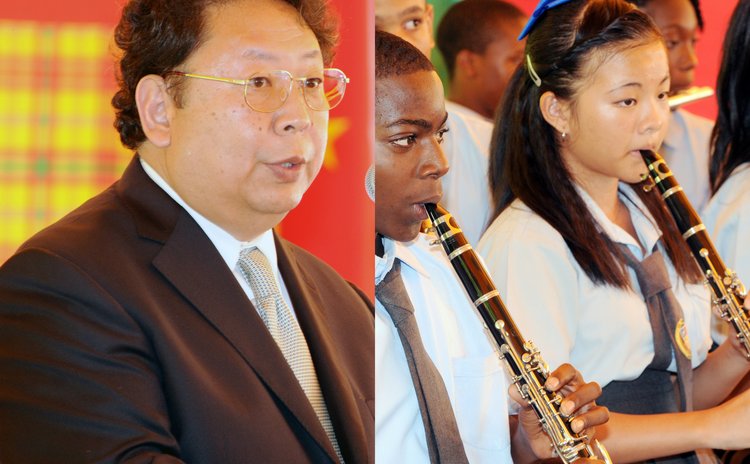 "This year makes the 10th anniversary of diplomatic relations between Dominica and China, since 2004 the friendship and corporation between our two countries have grown steadily," said Ambassador to China His Excellency Li Jiangning.

Speaking at the formal reception of the 65th anniversary of the formation of the People's Republic of China at the Fort Young Hotel on September 23, 2014, Ambassador Jiangning said he appreciates the support given from the Prime Minister Roosevelt Skerrit and ensures the continuation of projects in Dominica.

"We appreciate the support given to us when are faced with natural disasters and terrorists attacks; thank you, Prime Minister for your strong support and understanding in those times. We continue to work with our Dominican friends to bring ongoing projects smoothly to their completion and push forward the projects that are being finalized," he said.

In addition, Ambassador Jiangning said that currently in Dominica is a team of experts from China conducting training sessions to local technicians and workers on the installation of 2500 solar powered street lights.

"Much has been achieved and more needs to be done; we will continue to work hard to further our relations to a new level," he said.

Meanwhile, Prime Minister Roosevelt Skerrit said that "There is no doubt that over the years China has been an example of how a developing state can go about improving the lives of its people".

Prime Minister Skerrit also stressed the maintenance of the One China Policy for the past ten years.

"Let me take this opportunity also to re-emphasis and restate our adherence and recognition of the One China Policy; Dominica has been recognizing this policy for the last ten years and remain steadfast to this policy recognizing the One China Policy. Our countries will continue to enjoy excellent relations both at the bilateral level and multilateral levels," said Prime Minister Skerrit.

Furthermore, PM Skerrit explained that the Chinese government has assisted Dominica in many aspects over the last ten years, ranging from the granting of scholarships to students, improvement to the island's and upgrade to the educational and health facilities.

"Over the last ten years we have seen China assisted Dominica in a number of areas including the provision of scholarships given to dozens of young Dominicans in the agricultural sector, in culture, in infrastructure; also, in education with the assistance of the construction of the Grammar School and the construction now of the new Newtown Primary School and very soon to commence is the new hospital at the Princess Margaret Hospital (PMH) that would assist in transforming the delivery of health care to our citizens and we look very much to the commencement of this important facility, the new PMH. All the finances were grants from the government and people of the People's Republic of China," he said.