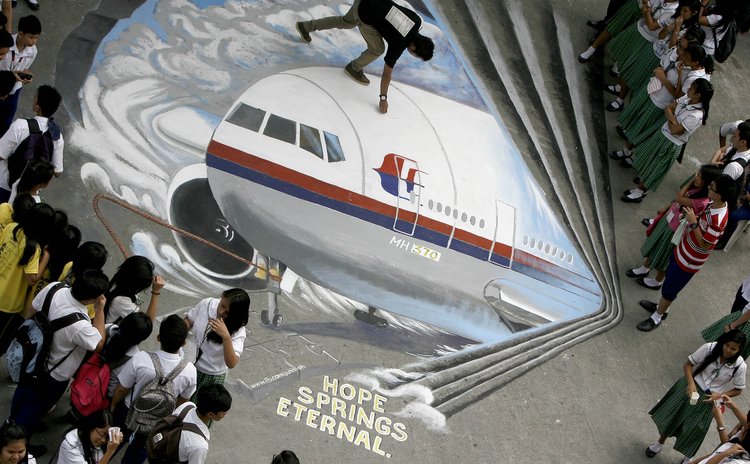 MAKATI CITY, March 17, 2014 (Xinhua) -- Students watch a three-dimensional graffiti as a way of sympathizing to the missing Malaysian Airlines flight MH370 at a school in Makati City, the Philippines,

BEIJING/Kuala Lumpur, March 17 (Xinhua) -- More countries are scouring an increasingly vast range of areas for the missing Malaysia Airlines jetliner that has till Monday disappeared for 10 days.

Despite the increasingly complicated circumstances, the expanding scope of search and the mounting difficulty, "as long as there is still a gleam of hope, we should continue to do our utmost," Li stressed.

China, he said, also hopes that the Malaysian side will conduct search and investigation simultaneously and that the Malaysian government and Malaysia Airlines will continue to mollify the families of Chinese passengers aboard the missing plane.

Najib briefed Li on the latest developments of the search and rescue mission and the next steps Malaysia will take, pledging that his country will continue to do its best until the jetliner is found.

Also on Monday, Chinese Foreign Ministry spokesman Hong Lei told a daily press briefing that China is readjusting its search efforts, with the focus no longer in the South China Sea.

The number of countries involved in the search has increased to 26, the Malaysian Ministry of Transport said in a statement, adding that the Foreign Ministry has sent diplomatic notes to all countries along the northern and southern corridors the plane might have taken as well as some other countries to request assistance.

In Australia, Prime Minister Tony Abbott said that at the request of his Malaysian counterpart, his country will take responsibility for coordinating the search in the southern Indian Ocean. He also promised to send more surveillance resources within the next 24 hours.

Australian Defense Minister David Johnston said on the same day that his country would do what it could to assist Malaysia to locate the missing Boeing 777 aircraft in whatever state it was in.

The Australian Maritime Safety Authority said in a statement late Monday that Tuesday's search will take place in daylight in the southern Indian Ocean west of Perth.

Kyrgyz President Almazbek Atambayev said on Monday that his country is ready to assist Malaysia in search of the missing flight.

The Ministry of Transport and Communications and the Air Defense Forces will provide all necessary information for the Malaysian side, he added.

On the same day, three French officials with experience of handling the 2009 Air France Flight 447 crash in the Atlantic arrived in Kuala Lumpur to share their expertise and knowledge.

Meanwhile, a Chinese cross-ministry work group entrusted with handling issues related to the missing Malaysian jetliner and the Chinese Embassy in Malaysia held another joint working conference with the Malaysian side.

Guo Shaochun, head of the Chinese task force, said that in view of the latest developments, China urges the Malaysian side to identify the scope of search, boost the search efforts and invite more countries to join the mission.

Noting that a group of Chinese civil aviation and transport experts have arrived in Kuala Lumpur to assist Malaysia in the search and investigation, he expressed the hope that the Malaysian side will hold close communication with Chinese experts.

Speaking at a press conference, Malaysia Airlines CEO Ahmad Jauhari Yahya said initial investigation revealed that it was the co-pilot of the missing plane who spoke the last words -- "All right, good night" -- at 1:19 a.m. on March 8 before the flight disappeared.

He added that, as for ACARS, the last transmission was at 1:07 a.m. on March 8, but it was unknown when it was disabled. Its next transmission, due 30 minutes later as programmed, never happened.

In India, Foreign Minister Salman Khurshid said that his country has not got any indication that the missing Malaysian plane was heading for a 9/11 style attack on India as rumored.

However, he maintained that the security agencies will probe all angles, and promised that India will do its best to help with the search and rescue mission.

Flight MH370 went missing in the wee hours of March 8 with 239 people on board en route from Kuala Lumpur to Beijing. The multinational massive search has so far failed to determine its whereabouts.