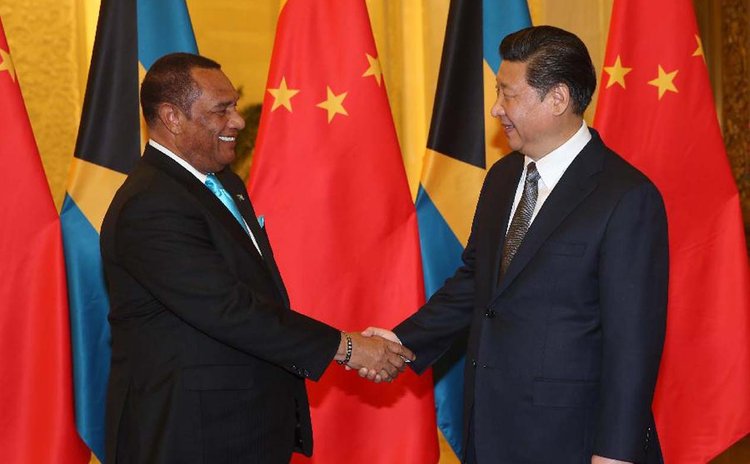 BEIJING, Jan. 7 (Xinhua) -- Chinese President Xi Jinping and Bahamas Prime Minister Perry Christie pledged to boost cooperation between the two countries as they met on Wednesday at the Great Hall of the People.

"China attaches great importance to ties with the Bahamas," Xi told the visiting prime minister, who is in Beijing to attend the opening ceremony of the first ministerial meeting of the China-CELAC (Community of Latin American and Caribbean States) Forum on Thursday.

"The Chinese side is willing to enhance communication and coordination with the Bahamas on reform of the United Nations, climate change, reform of the international financial system and other global issues," said the president.

Recalling his meeting with leaders of Caribbean states in June 2013, Xi said the outcomes of the meeting are being implemented and the relationship between China and Caribbean countries has improved, benefiting people from both sides.

Xi said he appreciates the Bahamas, which holds the rotating chairmanship of the Caribbean Community (CARICOM), for its contribution to the ministerial meeting of the China-CELAC Forum.

China will work together with all CELAC members to lead China-CELAC cooperation to a new height and ensure that the China-CELAC Forum and the China-CARICOM cooperative mechanism interact with each other favorably to better serve the economic development of Caribbean countries, said the Chinese leader.

Hailing the friendship and cooperation between the two countries over the past 17 years since the establishment of diplomatic ties, Christie said he looks forward to closer cooperation between the two countries on trade and investment. Christie also said he looks forward to more tourists from China and more businesses to build tourism-related infrastructure in the Bahamas.

As rotating chair of CARICOM, the Bahamas will make more efforts to promote China-CARICOM cooperation and China-CELAC cooperation, said the prime minister.