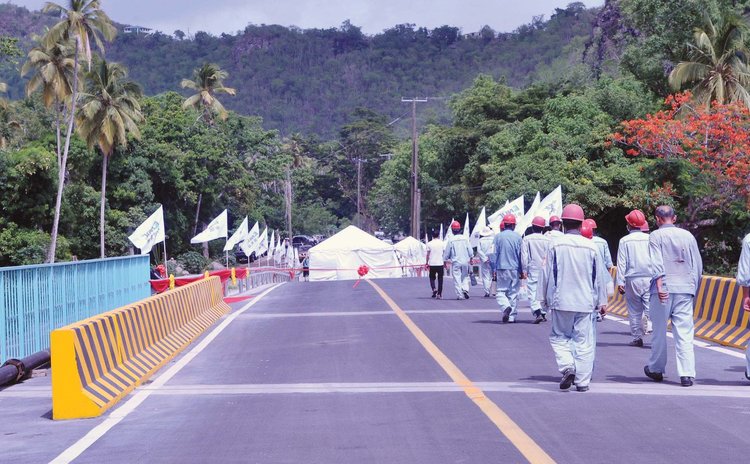 Chinese workers on one of the newly built Chinese bridges

The People's Republic of China continues to help Dominica in the development of its infrastructure with the recent delivery of three bridges.

The bridges are located at Macouchrie, Batalie and Pointe Round on the Edward Oliver LeBlanc highway from Roseau to Portsmouth.

The bridges are part of a US$21 million programme to rehabilitate the West Coast Road that was initially build by the Chinese as part of the gifts to Dominica's adoption of the One-China policy in 2004. The rehabilitation works were completed in 2012 but was severely damaged by Tropical Storm Erika in 2015.

Speaking at the opening of the bridges Chinese Ambassador to Dominica Lu Kun said the project, which started in March 2017 and completed in June 2020, was affected by Hurricane Maria and other factors. But the Chinese workers worked tirelessly, he said, "even in the shining scotching sunshine. They worked very, very hard."

Following Tropical Storm Erika, the People's Republic of China offered to rehabilitate the road and the Chinese government expedited the approval of this project and commencement letters, the Government Information Service (GIS) reported in 2016

According to GIS, in November two agreements were signed: the economic and technical cooperation agreement between the government of the PRC and the government of Dominica which provides for grant aid in the amount of approximately US$21M for rehabilitation of the west coast road.

The Prime Minister expressed gratitude for China's generous and speedy response to Dominica.

"The reconstruction of the west coast road is critical to our country and to the commercial efforts in Dominica. The Roseau to Portsmouth road is one of the most traversed roads in the country and it experienced tremendous damage during the storm…the Chinese, not waiting for us to ask for assistance, offered their assistance to reconstruct the west coast road. If we are not to receive this assistance through a form of grant then the only other option which is left to the government is to borrow the money."

He said notwithstanding its challenges, the People's Republic of China lives up to its international responsibility in assisting small island developing states like Dominica.

Work would have included replacement of bridges, repairs to damaged sections of the road surface, rehabilitation of culvert crossings and drainage infrastructure and some slope stabilization. Replacement of traffic signs, road markings and reflective road studs would also be included.

Ambassador of the PRC to Dominica, H. E. Lu Kun says more than just building roads the project signifies the strengthening of friendship between the two countries.

"With the support of your Hon Prime Minister and the Government of the Commonwealth of Dominica, the friendly relations of cooperation between our two countries will be further consolidated," he said.

He reiterated China's continued support to Dominica's economic development and pledged to exert his best efforts to strengthen this relationship.