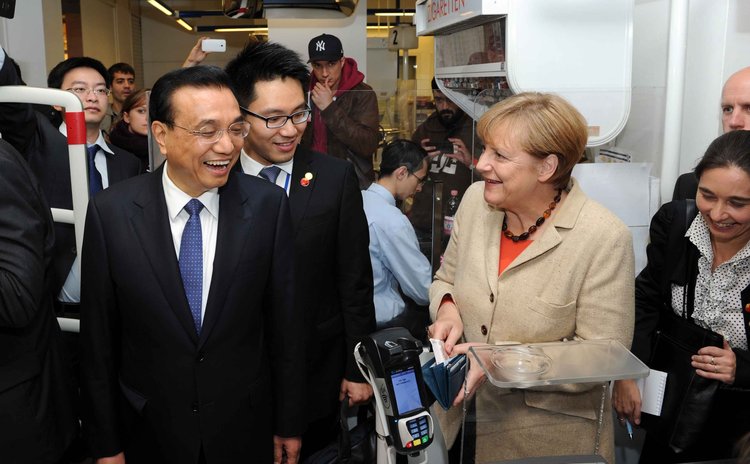 BERLIN, Oct. 10 (Xinhua/Sun) -- China and Germany on Friday announced their decision to develop an innovative partnership of mutual benefit with emphasis on innovation cooperation.

The two economic giants laid out their commitment in a comprehensive guideline for bilateral cooperation in the medium and long terms issued during Chinese Premier Li Keqiang's ongoing official visit to Germany.

According to the action plan, China and Germany are committed to promoting growth through reform and innovation so as to enhance the competitiveness of both countries.

The two countries agreed to deepen innovation cooperation in industry, urbanization, agriculture and other fields, and jointly undertake the tasks of sustainable development and protection of global public goods.

Both sides highlighted the achievements of bilateral cooperation in research, technology and innovation, and decided to take the innovative partnership as an opportunity to deepen innovation cooperation in the field of research and development and lift the level of cooperation in jointly selected areas.

China and Germany agreed to expand dialogue within the framework of the bilateral innovation policy platform, which should be used to enhance mutual understanding of each other's national innovation systems, promote two-way investment in research and development, and strengthen cooperation on special future-oriented issues and projects.

The fourth China-Germany innovation policy platform meeting, to be held in the first half of 2015 in Berlin, will be an important milestone, said the action plan.

China is invited to participate as a partner country in Germany's "Science Year 2015: The Future City" program, a campaign organized by the German Federal Education and Research Ministry.

The two countries decided to take it as an opportunity to strengthen cooperation in environmental science, with focus on water, land and air of future cities.

China and Germany agreed to increase governmental support for electric vehicles in research and development, market development, infrastructure construction and other fields within the framework of the Chinese-German Platform for Electric Mobility.

Li arrived here Thursday for a three-day official visit. Germany is the first leg of his three-nation tour, which will later take him to Russia and Italy.