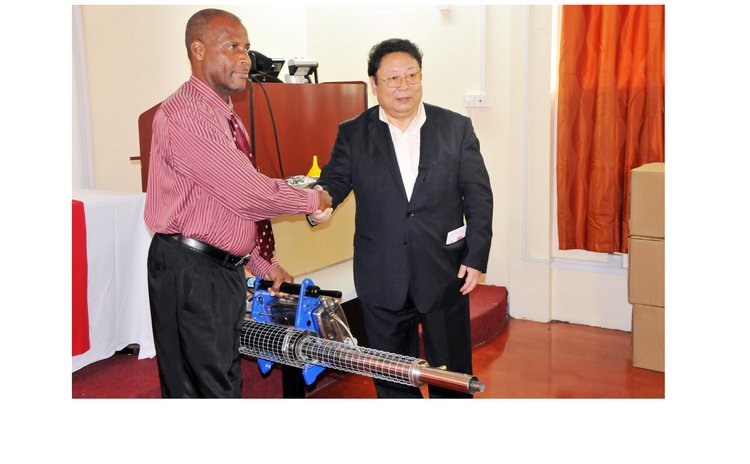 To help eradicate vector borne diseases the People's Republic of China has donated 50 fogging machines to the Environmental Health Department.

At the ceremony, Parliamentary Secretary of the Ministry of Health and Environment Ivor Stephenson said: "Vector borne diseases are not new, we have heard of the outbreak of malaria from 1960 and up to this time the threat of dengue fever."

Stephenson added that the main vector for these diseases is the Ades Aegypti mosquito.

"Much effort have been placed by the Ministry of Health and other agencies especially National Pest and Control for the control of Dengue Fever and other vector borne diseases," he said.

He noted although great strides were made the ministry is still faced with threats of the epidemical disease.

Stephenson added although there has been some improvement, the ministry received the fogging machines in order to control vector borne diseases people must change their practices, behaviours and attitudes.

In his remarks, Ambassador to the People's Republic His Excellency Li Jiangning gave an idea of the origin of the donation.

"This idea came after a conversation I had with an official in the Dominican government that there is a need for portable vector control machines on the island," he said.

Jiangning added that vector borne diseases are a big threat not only in Dominica but spreading in Asia at this time.

"These machines are filling a need for island wide vector control needs," he said.