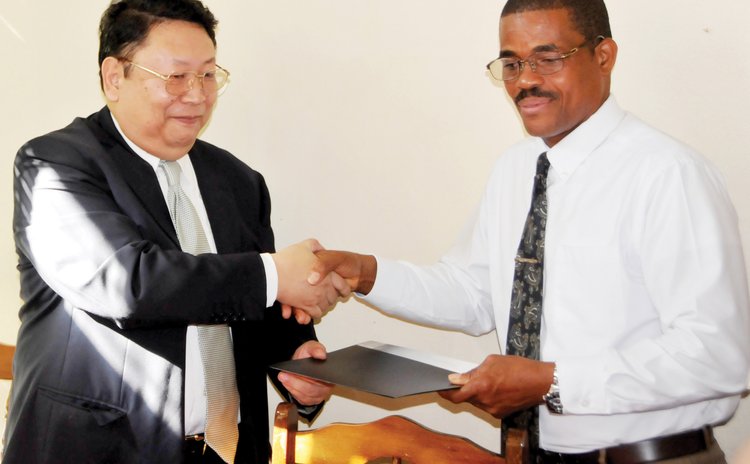 Although minor works are still ongoing the new Newtown Primary School was officially handed over to the Ministry of Education last week.

The Ambassador to China for Dominica and the Minister of Education and Human Resource Development signed the handing over certificates of the school on January 20 at the Ministry of Education Conference Room.

"The Newtown School is another example of strong friendships between the two countries and this is the eleventh year of diplomatic relations we have managed to come a long way many achievements have been made in the past," said the Ambassador of China to Dominica Li Jiangning.

Meanwhile, the Minister of Education and Human Resource Development Petter Saint Jean said that the students have moved in to the school for the commencement of the new school term since the construction is completed.

He noted that the school was not significantly affected by the passage of Tropical Storm Erika therefore the contractor was able to put the finishing touches in the last couple of months of 2015.

Saint Jean said the new Newtown Primary School is a state of the art facility equipped with new and improved amenities.

He noted that the school is equipped with large student friendly classrooms, rooms designated for art and craft and information technology, a library, kitchen, office space and staff quarters for school administration and teachers, a sick bay and an elevator that caters to the needs of physically challenged students.

In addition, Saint Jean said work is ongoing towards fencing the school scheduled to go on till February.

"Work is ongoing on the school grounds, while significant progress has been made to level and prepare the yard for sporting activities and to clear the grounds of all debris associated with building the construction of the perimeter fence will continue well into the month of February," he said.

Saint Jean said his ministry is extremely pleased with the new school.

He noted that this gift was much needed and was a long overdue educational institution for the people of Newtown.
Saint Jean said that construction of the new Newtown Primary School serves as a permanent reminder of the genuine relationship between the Commonwealth of the Dominica and the People's Republic of China.

Lastly, he noted that "As Minister I want to encourage the people of Newtown to take ownership of the building that is serves successive generations."