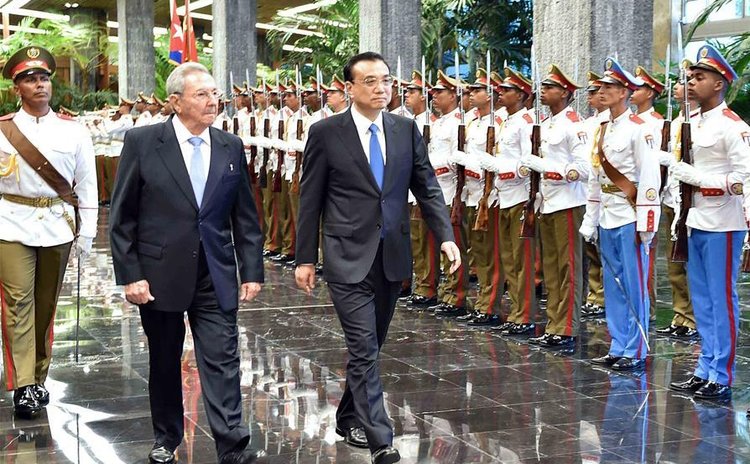 The pledge came as Chinese Premier Li Keqiang held talks with Cuban President Raul Castro at the Palace of the Revolution in Havana on Saturday.

Li arrived in the capital of the Caribbean country on Saturday afternoon following a visit to Canada.

Hailing the progress made in the past 56 years since the two countries set up diplomatic ties, Li said China has firmly adhered to the policy of China-Cuba friendship, supported Cuba in following a socialist path and promoted bilateral pragmatic cooperation.

Both China and Cuba are currently facing urgent tasks of developing the economy and improving the livelihood of the people, said the premier.

China wants to focus on development and cooperation with the Cuban side, supports Cuba's industrialization process and would like to conduct cooperation with Cuba in infrastructural construction and industrial equipment production, Li said.

Raul Castro, for his part, spoke highly of the historic significance of Li's visit, the first official visit by a Chinese premier in 56 years.

He said Cuba agrees with China on measures to develop bilateral ties and is willing to learn from China's development experience.

He also suggested the two countries enhance coordination on international affairs so as to safeguard common interests of the vast number of developing countries.

After the talks, the two leaders witnessed the signing of some 20 cooperative agreements in areas including economic technology, finance, production capacity, telecommunication, environment protection, and inspection and quarantine.

Li arrived in Havana Saturday for a three-day official visit to Cuba, the first official visit to the Latin American country by a Chinese premier since the two countries established diplomatic relations in 1960.

At the airport, a welcoming ceremony was held for Li, which was attended by Miguel Diaz-Canel, Cuba's first vice-president of the councils of state and ministers, and some other senior officials.