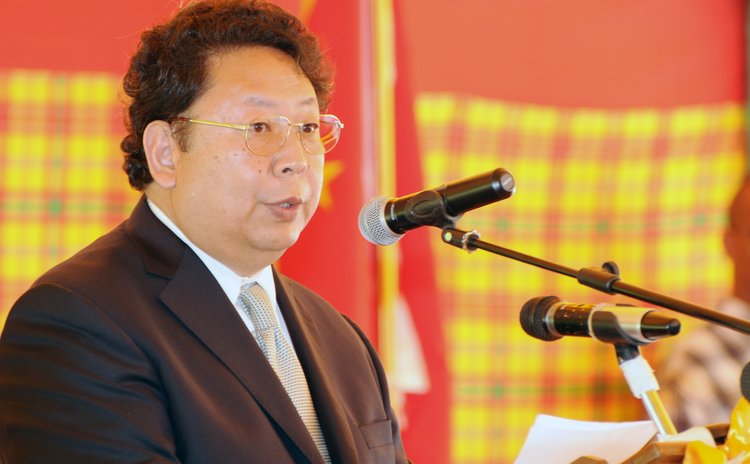 Letters of Exchange have been signed between the Governments of Dominica and China for rehabilitation of the west coast road.

This signing ceremony took place on July 14 at the Ministry of Finance Conference Room.

The agreement was signed between Prime Minister Roosevelt Skerrit and the Ambassador of the People's Republic of China to the Commonwealth of Dominica His Excellency Li Jiangning.

Minister for Public Works and Ports Miriam Blanchard said the signing was "a continuation of the relentless efforts and commitment of this government to forge forward rehabilitation of our beautiful island."

She added that since the establishment of diplomatic relations between Dominica and China, the Government of China has collaborated on a number of political, economic and social programmes of mutual interest.

Blanchard stated that the signing of the Letters of Exchange will further strengthening of the relationship between the two governments.

"Certainly a review the physical infrastructure of the island would reveal a very visible representation of the collaboration of our two countries," she said.

Blanchard said the west coast rehabilitation project will include: replacement of bridges destroyed at Macouchrie, Batalie and Point Round, rehabilitation of culvert crossing and drainage infrastructure at Mero, Macouchrie, Salisbury, Batalie, Coulisbistrie and Picard some slope stabilization will also be included.

She added the project will include "repair of damage sections of the road surface in identified areas including the Jimmit-Petro Caribe Junction, Tarreau, St Joseph, Mero, Macouchrie, Salisbury, Batalie, Bioche and Dublanc."

Prime Minister Roosevelt Skerrit said that though the ceremony was very short and simple "we must not underestimate the importance of that ceremony in terms of its impact on the Dominican landscape."

Skerrit said that immediately after the passage of Tropical Storm Erika the Chinese Government was one the first countries to offer assistance to Dominica.

"Before we could ask China for any assistance, China offered the assistance and in respect to the West Coast road it was the Chinese Government that came forward very early to say that the government of China will underwrite the cost associated with the rehabilitation of the west coast road," said Skerrit.

The cost of the project was not disclosed at the signing ceremony.

"The 45.2-kilometre highway linking the capital city of Roseau and Portsmouth, the second largest city in the nation, is a backbone road and the largest such project under construction in Dominica," said Xinhua

The rehabilitation of the West Coast Road was one of the four-pillar projects agreed in the Memorandum of Understanding of March 23, 2004 when the two countries established diplomatic relations.