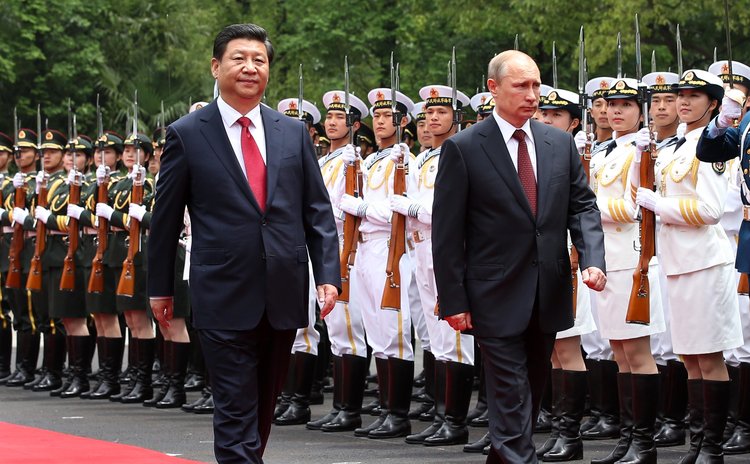 SHANGHAI, May 20 (Xinhua/Sun) -- China and Russia pledged to step up cooperation on multiple regional platforms in a joint declaration signed in Shanghai on Tuesday.

The two countries paid high attention to the cooperation under the framework of the Shanghai Cooperation Organization (SCO), including in the fight against terrorism, separatism, extremism, arms trafficking, illegal drug trade and organized cross-border crimes, and safeguarding of international information safety, according to the declaration.

The two said it is the SCO's priority to promote regional economic cooperation, improve investment environment in its member states and strengthen exchanges among the industrial circles. The Eurasian Union, scheduled to be established on January 1, 2015, will help promote regional security and stability and deepen mutually beneficial cooperation, said the statement.

Russia spoke highly of the Silk Road Economic Belt initiative proposed by China and the two will seek conjunction points between the economic belt and the Eurasian Union, such as the building of transportation infrastructure, it said.

The two pledged to strengthen coordination and cooperation under the framework of the APEC and to jointly promote the economic growth in the Asia-Pacific region. Russia will closely work with China to take advantage of the meeting to promote economic integration, reforms and growth and building of transportation infrastructure, it said.

The two also promised to deepen cooperation under the framework of CICA, saying CICA is an effective mechanism in holding talks in safeguarding regional peace and security.

Russia welcomed China as CICA chair from 2014 to 2016, saying the chairmanship can help promote the implementation of trust-building measures, said the statement.

The two will closely coordinate their stance under the framework of CICA and roll out shared proposals on the building of security framework and safeguarding of stability and development in the Asia-Pacific region, it added.