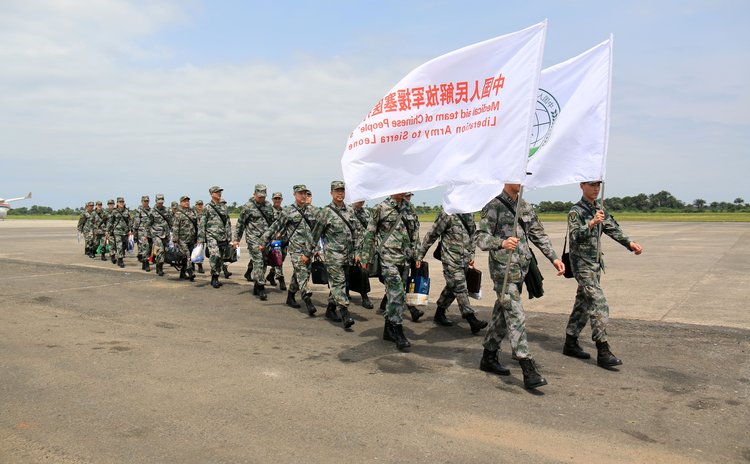 "I had just been admitted at the hospital when the first case of death among health care workers occurred at the hospital," said Seyon, a housewife, who was placed in isolation at the Redemption hospital in the Borough of Kru Town.

"As if God wanted me to be around, the Chinese shipped a huge consignment of PPEs and other essential supplies to give a boost to government's response efforts. I am a beneficiary of the Chinese gesture and today I recovered from the disease and here I am," said Seyon.

China has scaled up assistance to help in the fight to contain the deadly Ebola Virus Disease that has overwhelmed the population since its outbreak in March.

The facility will be completed and placed on-line within 10 days, Chinese Ambassador to Liberia Zhang Yue told reporters Saturday.

When completed and placed on-line, the new facility will be the "only ETU in Liberia that is constructed, staffed and operated by a state partner," said Zhang.

The Chinese envoy said it is part of a China's fourth batch of assistance totaling 82 million dollars to African countries to fight the Ebola outbreak in the three hard-hit West African Countries of Liberia, Guinea and Sierra Leone.

"Today, 160 medical staff who will manage and operate the China ETU arrived in Liberia," the Chinese envoy said after escorting the team from Roberts International Airport to the Samuel K. Doe Sports Complex where the China ETU is being constructed.

The Chinese envoy spoke after he received 160 of his countrymen who will be deployed at the ETU to serve as medical staff.

He said the 160 medical staff comprised of "medical experts, epidemiologists, doctors, nurses, engineers and technicians and forms part of the first batch of 500 medical staff."

He said the 500 medical staff will come to Liberia in three batches to treat Ebola patients in the country.

From April to September, China provided the three countries three batches of emergency assistance worth more than 40 million dollars to fight the outbreak, Zhang said.

"Up to now, China's total assistance to Africa has reached 122 million dollars covering 13 Africa countries, international and regional organizations including UN, WHO and AU," he said. "It is the first time for China to carry out such a large-scale operation in its history of responding to global nontraditional security crisis."

He said in addition to cash and in-kind assistance, China also provides soft assistance like dispatch of experts on epidemic prevention and medical staff sharing of experience and joint research.

"There are nearly 200 Chinese medical staff in the epidemic region at present and this will surpass 700 who will devote themselves to disease prevention and control on the ground," the Chinese envoy said.

He said China will help African countries build their capacities in the public health security in the post-Ebola era.

Doctor Mao Qing, who arrived with the medical team on Saturday, told Xinhua he had once served in the UN mission in Liberia but returned home after the end of his assignment.

"When the opportunity came for a reunion with my colleagues especially defeating an unseen enemy, I took the challenge and here I am again in Liberia in a different task," Mao said. "I am hopeful that with China's support and that of other countries, the good people of Liberia will recover from this outbreak to begin to put their lives back in place."