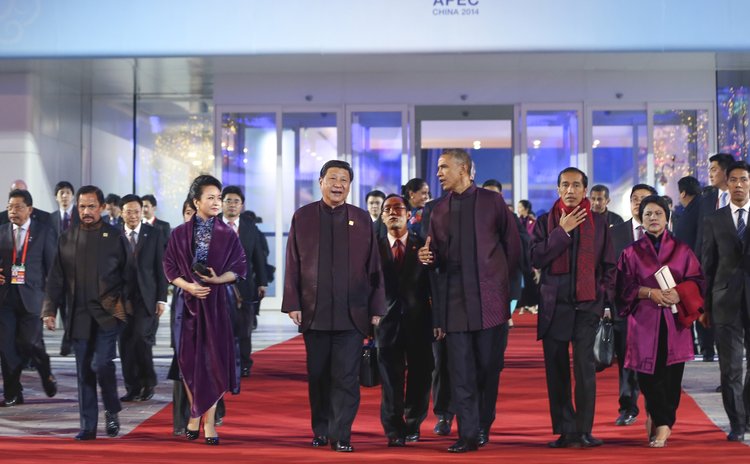 BEIJING, Nov. 10 (Xinhu/Sun) -- Chinese and U.S. politicians and experts believed the visit by U.S. President Barack Obama to Beijing will provide an opportunity for both sides to enhance mutual trust and cooperation.

Wang said the current drive of Beijing and Washington to build a new type of major-country relationship not only benefits the two countries but also serves to reassure the entire world.

Obama is paying a state visit to China and attend the 22nd APEC Economic Leaders' Meeting in Beijing from Nov. 10 to Nov. 12. This will be his second China tour as U.S. president and the first one in his second term.

Chinese Ambassador to the United States Cui Tiankai said Tuesday that both countries have been doing a lot to prepare for Obama's visit and summit with Chinese President Xi Jinping.

The two leaders will be able to have an "in-depth exchange of views" covering all aspects of bilateral ties as well as regional and international issues, the ambassador said.

Earlier in October, visiting Chinese State Councillor Yang Jiechi said in Washington that Beijing is willing to closely cooperate with the U.S. side to make all proper preparations for Obama's participation in the APEC meeting and his visit to China.

Noting that positive progress has been made recently in improving the bilateral ties, Yang expressed the hope that China and the United States will move in the same direction to deepen cooperation and coordination in various areas and on important regional and international issues.

The senior Chinese official also urged the two sides to conduct active interaction and cooperation in the Asia-Pacific region, resolve bilateral issues in a constructive way, and seek more tangible achievements in building a new type of major-country relationship.

On the U.S. side, Secretary of State John Kerry said Friday that Obama is looking forward to his China visit and Washington is ready to work with Beijing to push forward the establishment of a new type of major-country relationship.

Calling the China-U.S. ties the most influential bilateral relations in the world, he said it is in the interests of both countries to support each other on occasions of major international events and multilateral meetings.

Former U.S. Secretary of State Henry Kissinger said in an interview with Xinhua on Wednesday that the two presidents are expected to talk about a whole range of issues to enhance understanding and cooperation.

"I have had an opportunity to talk to President Obama and I'm absolutely convinced that he's going to China with a dedicated attitude," he said.

According to Kissinger, the topics the two leaders may cover in their talks include climate change, nuclear proliferation, Northeast Asia, accidents at sea, and how to ease certain regional tensions.

Kenneth Lieberthal, a senior fellow in foreign policy and global economy and development at the Brookings Institution, told Xinhua in a recent interview that Xi and Obama are committed to trying to move the relationship forward.

"The fundamental issue is how do we keep this relationship on a better path that serves the interests of both countries and serves broader regional and global interests," the U.S.-based China expert said.

Lieberthal suggested that the two leaders articulate where the upside is of this relationship and realize more of the benefits and mitigate some of the tensions.