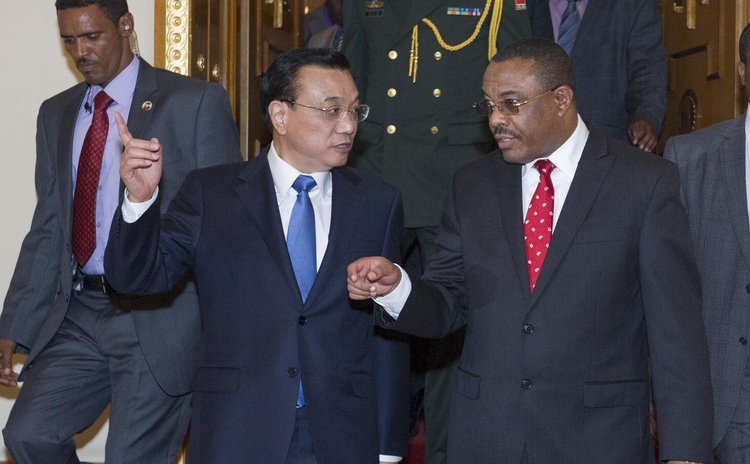 ADDIS ABABA, May 4 (Xinhua/Sun) -- Chinese Premier Li Keqiang started an Africa tour on Sunday with his arrival in Ethiopia, where he will also visit the headquarters of the African Union (AU).

"I am looking forward to an in-depth exchange of views on bilateral issues and issues of common concern with Ethiopian and AU leaders, and ready to promote further development of relations and cooperation between China and Ethiopia as well as the larger AU," Li said upon his arrival here.

Ethiopia is the first leg of Li's ongoing four-nation Africa tour, his first to the "Land of Hope" since he took office last year and the latest stroke of the frequent high-level diplomacy between the Asian giant and the promising continent.

During his stay, Li will hold talks with Ethiopian Prime Minister Hailemariam Desalegn, meet President Mulatu Teshome and sit down with Chinese and African business leaders to discuss the China-Africa economic and trade cooperation.

The Chinese premier is also scheduled to pay a visit to the AU headquarters and deliver a speech there to expound his country's Africa policy and reaffirm Beijing's commitment to deepening the new type of the China-Africa strategic partnership.

In a joint interview with African media released Sunday before his departure, Li said the trip, which will also take him to Nigeria, Angola and Kenya, will be "one of cooperation and solidarity on the basis of past traditions."

"I will feel the deep friendship based on solidarity and mutual assistance between the Chinese and African peoples, see for myself Africa's dynamic economic and social development, and listen to the African people's description of their expectation for good life in the future," he said.

The premier added that he is more than ready to make concrete efforts to deepen China-Africa relations and advance bilateral cooperation in various fields for the greater benefit of both sides.

In a press briefing about the trip on Wednesday, Vice Foreign Minister Zhang Ming said it will further consolidate the strategic trust between China and Africa, deepen their cooperation in various areas, and lift China-Africa and China-AU relations to new highs.

China, Zhang added, also hopes that the visit will help mobilize other members of the international community to pay more attention to and increase their input in Africa, so as to create a good external environment for its development.

Adding an extra layer of significance to Li's trip, it comes upon the 50th anniversary of late Premier Zhou Enlai's first visit to Africa, a historic feat that created a new era in China-Africa interaction.

Respectively as the world's largest developing country and the continent with the most developing countries, China and Africa are natural partners in pursuing common development. China has been Africa's largest trading partner for five consecutive years, while Africa has become an important market and investment destination for China.

As an integral part of the China-Africa ties, the relationship between China and Ethiopia has witnessed steady development since the two countries established diplomatic relations in 1970, particularly since they forged a comprehensive cooperative partnership in 2003.

"China is considered to be Ethiopia's strategic development partner," Teshome said in an interview with Chinese journalists on Wednesday, noting that China has also proved itself to be his country's "dependable friend" in its fight against poverty.

"The multifaceted ... relations between Ethiopia and China will continue to grow both in width and depth because of the fact that our bilateral relations are based on mutual trust, mutual understanding and mutual respect," said the president.

For his part, Hailemariam told Chinese reporters on Saturday that Li's visit to Ethiopia will further deepen the already existing relationship between the two countries.

"This witnesses how strong our relationship is, and this relationship is a win-win situation where both Ethiopia and China will benefit," added the prime minister.