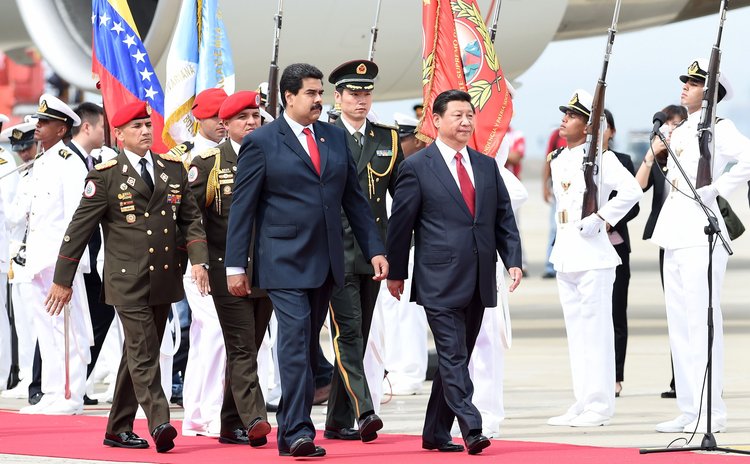 He was warmly greeted by Venezuelan President Nicolas Maduro after the landing of his plane, which was escorted to the airport by two Venezuelan fighter jets after it entered the Venezuelan airspace.

In remarks made upon arrival, Xi said the sincere friendship between China and Venezuela spans the vast oceans between them, and lauded the bilateral strategic partnership for common development.

Noting that this year marks four decades of diplomatic ties between the two countries, Xi said the future of the bilateral relations will be even more promising.

"I am looking forward to charting the future course of bilateral ties together with President Maduro and communicating extensively with the Venezuelan people from all walks of life, so as to promote friendship, cooperation and development and lift the China-Venezuela relations to a new height," he said.

Bilateral relations have achieved comprehensive and rapid growth since a strategic partnership for common development was forged in 2001.

Xi is expected to hold talks with Maduro, who visited China in September 2013, over future development of the bilateral ties.

Both leaders will also attend the closing ceremony of the 13th meeting of the China-Venezuela High-Level Joint Commission.

During the visit, the two sides are expected to ink a series of cooperation deals on finance, infrastructure construction, agriculture and high-tech.

Backing each other on issues concerning their core interests, China and Venezuela have conducted fruitful cooperation in areas such as energy, finance, infrastructure construction, agriculture, hi-tech and people-to-people exchanges.

Before Venezuela, Xi has paid state visits to Brazil and Argentina. In Brazil, he attended the sixth BRICS summit and met leaders of Latin American and Caribbean nations.

His current Latin America tour will also take him to Cuba.