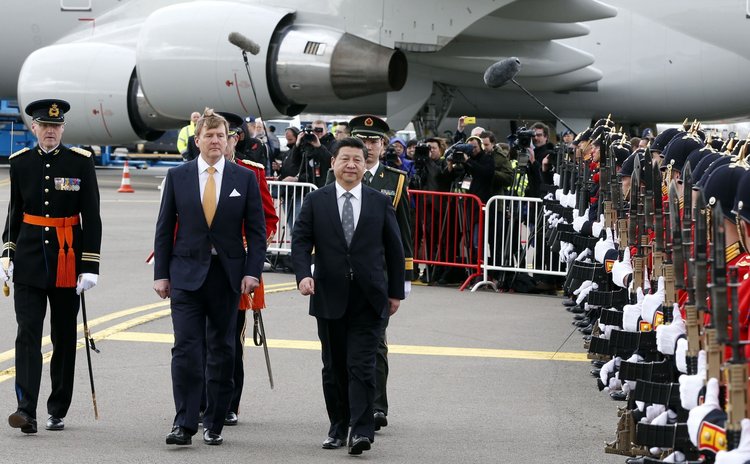 BEIJING, March 17 (Xinhua/Sun) – President Xi Jinping will make his first trip to Europe since taking office from March 22 to April 1.

Xi will pay state visits to the Netherlands, France, Germany and Belgium from March 22 to April 1. He will visit the headquarters of the European Union from March 31 to April 1.

"China-Europe relations are facing new opportunities as both are at the tipping point of reform and development. President Xi's visit to Europe, instilling new vitality to a long-term stable and healthy relations, will be a milestone for both sides," Chinese Vice Foreign Minister Wang Chao told a news briefing on Monday.

The Netherlands is the first stop on Xi's visit. He is the first Chinese president to visit the Netherlands since the two states established diplomatic relations in 1972 and will meet King Willem-Alexander and parliamentary leaders, before holding talks with Prime Minister Mark Rutte. Both sides will sign cooperation agreements on agriculture, energy, finance and culture.

Both sides will exchange views on strategic mutual trust, mutual cooperation and partnership in international affairs, stressing China-France relations take the lead in China-Europe ties, Wang said. During the visit, the two sides are expected to sign agreements on education, science and technology, energy, aviation, urbanization and agriculture.

Germany is China's biggest trade and technology partner in the EU. China and Germany have expanded cooperation in culture, science and technology, education and the military. Xi's is the first state visit to Germany by a Chinese president in eight years. The two sides will map out the relations for the coming 5 to 10 years from a strategic and long-term perspective. Xi will meet with President Joachim Gauck and Chancellor Angela Merkel, deliver a key note speech, attend a banquet with business leaders and meet with entrepreneurs from both countries. The two sides will sign cooperation agreements on industry, aviation, science and technology, education, culture and agriculture.

Xi's visit to Belgium will be the first for a Chinese head of state in 27 years. He is scheduled to meet King Philippe and have talks with Prime Minister Elio Di Rupo. Cooperation documents are expected to be signed, ranging from economy and trade, science and technology to telecommunication and education.

Xi will be the first Chinese head of state to visit the headquarters of EU since the establishment of diplomatic ties between China and EU in 1975. He will hold talks with European Council President Herman Van Rompuy and meet EU Parliament President Martin Schulz and European Commission President Jose Manuel Barroso.

China and Europe have a strategic plan for China-EU cooperation until 2020, which came out of the China-EU summit in Beijing in 2013.