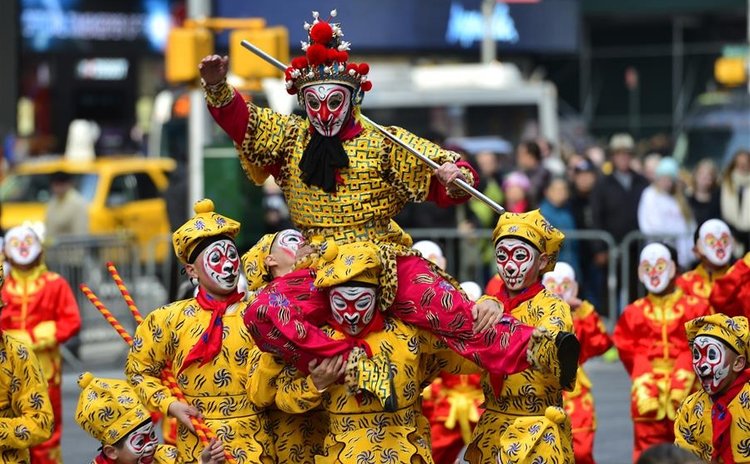 A flash mob featuring a hundred performers in monkey costumes makes an appearance to celebrate the arrival of the Chinese New Year in Times Square on Manhattan, New York, the United States, Feb. 6, 20

BEIJING, Feb. 8 (Xinhua) -- Fourteen-year-old Chen Yiyue, who is half-Chinese, half-French, has always relished the atmosphere of a Chinese Spring Festival celebration. When her mother invites friends to dine with them during that festival, the table is full of delicious food, ladies all wear red and grandparents give her cash-stuffed red envelopes.

Yiyue's father Herve Delmaire immediately fell in love with the festival when they started celebrating it about 10 years ago, and actively joins in the preparations each year, always rushing to decorate rooms with red lanterns. Now, their French friends ask the family each year on what day they celebrate the Chinese Lunar New Year.

For Yiyue's mother Chen Li, the Spring Festival celebration is more than a tradition to keep the memory from her hometown and home country alive. It is also a chance for her husband and French friends to share in the joy and warmth of the traditional Chinese festival, and send good wishes to each other for the next year.

The themes of the festival, including reunion, luck, peace, affluence, good health and safety, are all ideals that Chinese people have held for thousands of years, said Feng Jicai, a famous writer and president of the Chinese Folk Literature and Art Association.

In order to be with families at the most important festival of the year, Chinese people travel long distances to go back home, as 2.9 billion trips are expected to be made during this holiday season.

However faraway and inconvenient -- even settling with a standing ticket for a 20-hour-plus trip -- Chinese people would not be willing to miss the annual family reunion. They go home, bring gifts, hand out red envelopes to seniors and children, and offer their best wishes to each other for a good year.

The festival, an occasion which features exciting family reunions and sincere caring for families and friends, is also known for its inclusiveness, which allows people from across the world to join the celebration regardless of their cultural, racial and religious backgrounds.

In New York, a video celebrating the start of the Year of the Monkey made its debut on the screen at Times Square on Sunday, the Chinese Lunar New Year's eve.

New stamps to commemorate the Year of the Monkey were put on sale in various countries including Canada, France and the United States.

The popularity of the festival stems from its positive, universal spirit, which incarnates the best of human nature. The traditions of the festival, such as going home for a family reunion, enjoying food together, getting rid of old clothes and wearing new ones, praying for a peaceful year and exchanging blessings, can be found across different cultures.

Both political heavyweights and business tycoons worldwide have already begun to understand the importance of this spirit.

In a message sent to the Chinese people on Saturday, United Nations Secretary-General Ban Ki-moon said that the monkey symbolizes intelligence, agility and good fortune, so 2016 is a good year full of hope and energy.

"We wish to have a good start from the year of the lucky monkey," Ban said, referring to the implementation of the Sustainable Development Goals.

Facebook hosted top Chinese chefs at its headquarters in Menlo Park, California, inviting them to cook dishes at the company kitchen during their Chinese Cuisine Week, which is dedicated to recognizing the Chinese culture and celebrating the Chinese Lunar New Year.

Facebook founder Mark Zuckerberg, with his Chinese American wife and daughter, even posted a video with new year's greetings in Chinese. In the video, they mentioned a family reunion dinner they held to celebrate the New Year, and wished the audience health and prosperity in the Year of the Monkey.

As the world is facing daunting challenges including economic downturns, regional turmoils and refugee crises, the spirit of the festival is needed by the international community more than ever.

"Only with family members at home could I enjoy the festive atmosphere and delightful feeling of celebrating the new year," said Sally, a Syrian refugee, who only gave his last name. Sally said his dream was to go back to his home country as soon as possible to celebrate the new year with his family members.