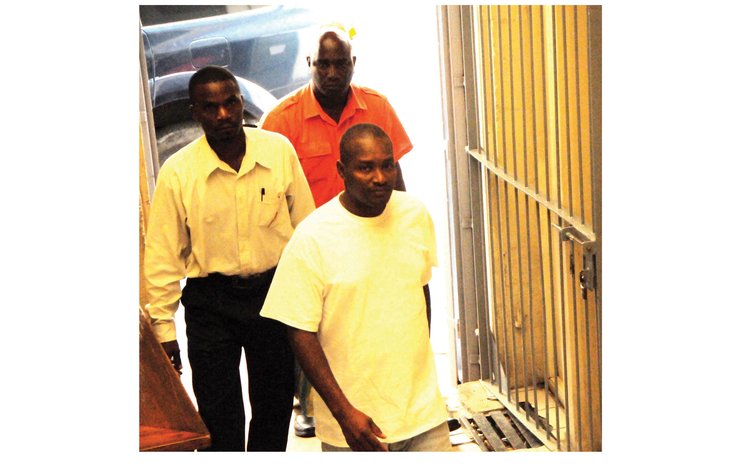 Kurt Pemberton a bus driver of Victoria Street, Newtown who walked into a business place in Roseau last week and chopped a young woman has been charged with attempted murder.

The incident which occurred November 23rd, 2015 sent shock waves through the Dominica community.

It is alleged that Pemberton entered the work place with a concealed cutlass and there unleashed several wounds to both hands and other parts of the woman's body.

Later she underwent surgery; she is now a patient at the Princess Margaret Hospital (PMH).

At the court on Thursday, dressed in a plain white tee-shirt Pemberton listened as the court's clerk read the charge. He was not required to enter a plea. He did not have a lawyer.

Inspector Michael Laudat, who leads the prosecution, told Magistrate Sherma Blaize-Sylvester that he was objecting to the granting of bail to the prisoner because of the seriousness of the woman's injuries.

"She (the virtual complainant -VC) is still not out of the woods…and the prosecution fears that if bail is granted he will interfere with the VC who is a patient at the Princess Margaret Hospital and other prosecution witnesses," Laudat told the court.

He added that Pemberton has convictions of violence against the woman and that current matter was of great public interest.

"The public interest is also of concern given the fact that of late the spate of violence against women is high. The violence used against her and the offence is very serious, we also fear that if granted bail he may abscond. The evidence against him is also potent," Laudat told the court.

He said that while the granting of bail is at the discretion of the court, he was begging that bail must not be granted and that if the Magistrate had any issues the court could adjourn the matter to hear evidence.

When the Magistrate asked Pemberton to comment on the submissions that the prosecution raised for denial of bail, Pemberton said he had nothing to say.

Magistrate Blaize-Sylvester then informed Pemberton that her denial of bail was "not punitive" and that he was "free to apply for bail at any time."