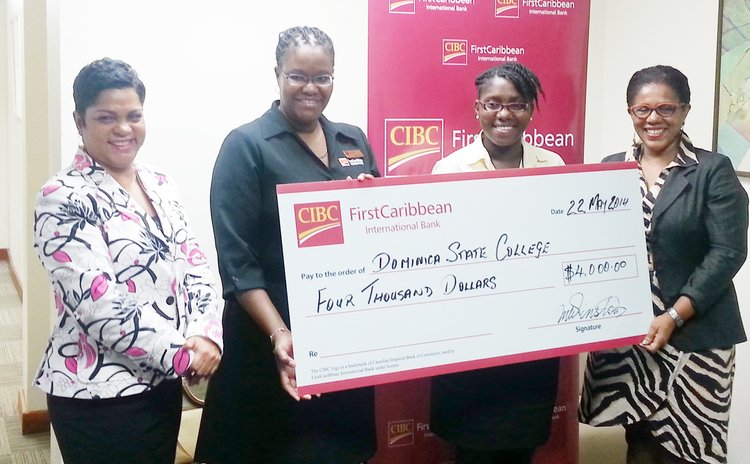 A seventeen year-old student of the Dominica State College (DSC) has received a $4000 scholarship from the CIBC FirstCaribbean International Bank.

Arthlene Bellot of Trafalgar is majoring in Business Administration and is in her second year at the DSC.

The cheque was presented to her at a small ceremony on Thursday. On hand to witness the presentation were her parents Mr. & Mrs. Arthur Bellot as well as the Bursar of the DSC Catherine Abraham who received part of the money on behalf of the college. The other portion was given directly to Miss Bellot since she had already expended money for her first year of attendance at the college.

The cheque has presented by Rhona Lawrence, Business Support Officer of the bank who congratulated the recipient and encouraged her do make good use of the opportunity. Lawrence said that bank has built a partnership with the college and will continue to support its efforts to provide quality education for the young people of the country. The bank, she said, annually provides a scholarship to a student of the DSC, some of whom have obtained employment from the bank.

Miss Bellot in her response thanked the Bank and promised to do her best to make the bank, her parents and the DSC proud. Abraham thanked the bank on behalf of the DSC and said that the college was grateful and looked forward to continue working with the bank.