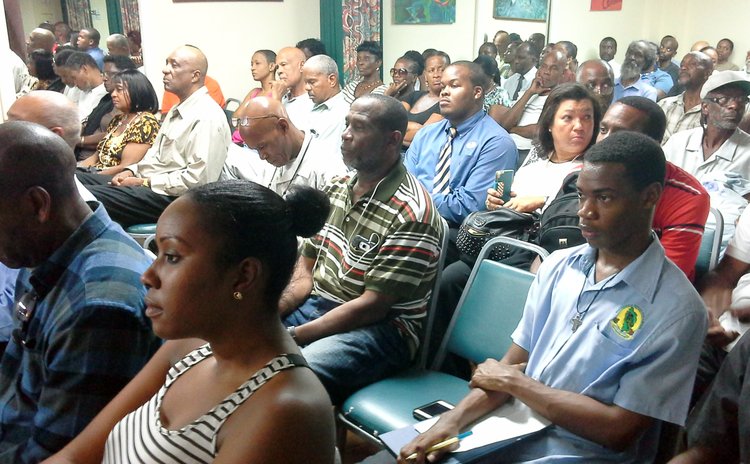 Persons listen to speakers at discussion on good governance

Panelists at a discussion hosted by the Citizens Forum for Good Governance at the Garraway Hotel on Tuesday believe the time if right for governments in Dominica to "be more accountable for good governance to the citizenry."

In his contributions, Gregoire who was replaced by Vince Henderson as UN Ambassador took issue with the Electoral Commission and how it operates.

"The Electoral Commission has taken decisions it has failed to implement and that is a serious governance problem. Because what it does, it creates a suspicion in the minds of the public that they have something to hide and that they are pandering to partisan behavior when they should be independent. They have to act in the best interest of the people of Dominica and not any ruling party," Gregoire stated.

Meantime, St. Hilaire called for campaign finance reform in Dominica. He pointed out that currently Dominica has no campaign financing legislation; he described today's campaign format as a "vulgar and sewo type," which did not existed before.

"My own conclusion and proposal for campaign finance reform is based on four simple points. I think it should be financed by the public, there must be a ban on all huge billboards, we must have spending limits, and there must be a system to police and to punish violators of that system," he said.

He noted further that some of his proposals are radical, however "if Dominica is serious about reform, the public, government and the Treasury must fund campaigns and equal amounts must be allocated to all parties to run their campaigns."

"I live and work in Switzerland and on every issue they vote on a referendum…I travel around and I don't see these size of billboards and yet Switzerland is one of the richest countries in the world," St. Hilaire stated.

He argued that although some spending has to be done during campaigns, there must be a limit and it should not be "a free for all."

"You have to run your campaign and you need to transport people, you need to advertise, you need to get some messages across, so there is a certain amount that you need to spend but there must be a limit on that amount," he said.

He suggested that the names of people who finance campaigns must be published and records made available for independent audits.

Shillingford dealt with the Integrity in Public Service Act while Douglas spoke about his tenure as "Press Secretary" and the right to disseminate government information to the public. He said on many occasions he was left "stranded and frustrated" because he was not able to get information from the government who was supposed to be furnishing him with information for the general public.

"It was rough and frustrating," he stated.