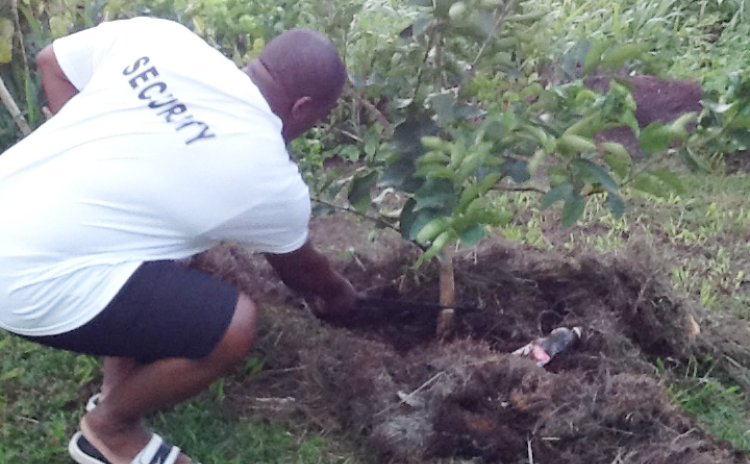 Agricultural officials have undertaken a search and destroy operation of citrus trees in Pointe Michel to eradicate the new Citrus Greening disease. About 150 trees were cut down and burnt last week.

Ryan Anslem of the plant protection officer of the division of agriculture said the disease, discovered in Dominica in May 2012 had been found in several communities around the island including Pointe Michel, Cabrits, La Plaine and Wesley.

He said in Pointe Michel ninety- five percent of the citrus trees were infected with Citrus Greening Disease or HLB.

HLB, also known as Citrus Greening Disease, is fatal; once a tree becomes infected, there is no cure. The disease is spread by an insect called the Asian citrus psyllid.

Anselm said the disease destroys the production, appearance and economic value of citrus trees. Diseased trees produce bitter, hard, misshapen fruit and die within a few years of being infected. HLB is considered to be one of the most serious plant diseases in the world.

"We are going on an eradication drive because we have a good opportunity to eradicate the disease in Dominica," he said "While the ministry recognizes the fact that the eradication exercise will affect the livelihood of some farmers, the decision is vital for the survival of the citrus industry in Dominica."

Anslem said that one year after cutting down and burning the trees farmers and others may replant.

The agricultural official further explained that detection of HLB can be difficult because symptoms may not show up for more than a year after the tree has become infected.

"The first symptoms are yellowed leaves. However, citrus trees often have yellow leaves because of nutritional deficiencies. HLB leaf symptoms are somewhat unique in that the yellow mottling caused by HLB is not the same on both sides of the leaf," Anslem stated.

He said that later symptoms of HLB-infected trees include lopsided, small fruit, and premature and excessive fruit drop. Additionally, the disease can cause entire shoots or branches of the tree to become yellow.

"Once a tree is infected with HLB, it will die and must be removed to protect other nearby citrus trees. Diseased trees can become a reservoir and breeding ground for Asian citrus psyllids carrying HLB, allowing the insects to spread the disease. Infected trees must be removed to protect other citrus trees, the community's citrus and the quality of life for future generations. The disease can also be spread by grafting infected plant tissue onto another plant," he said.

Anselm warned that if that disease in Pointe Michel was not eradicated it would spread to commercial areas. He said infected trees in other communities have been cut down.