Civil Servants in Blue and Red 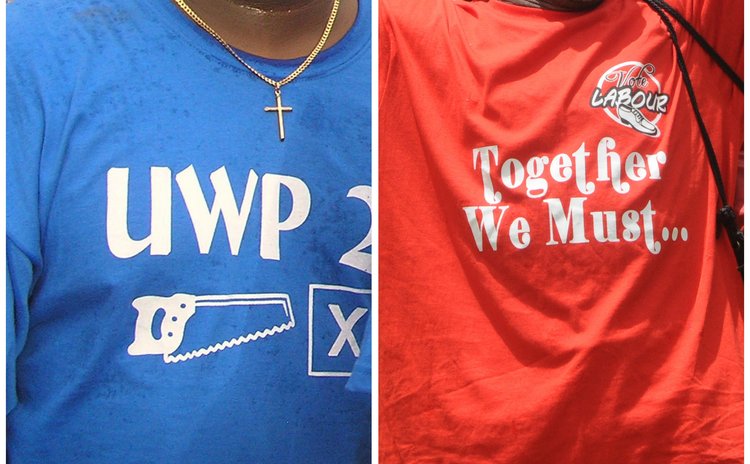 Left, blue of UWP and right, red of DLP

It is an open secret. Civil servants have been actively participating in election campaigning over the years but now that the numbers are growing, union bosses are getting a headache. They are warning their members who dress in blue and red at political rallies, the dominant political party colours, that the Police Regulations and the Public Service Act forbids it.

Thomas Letang is the General Secretary of the Dominica Public Service Union (DPSU) and says the Public Service Act of 1991 addresses the issue of Public Officers taking part in open political activities.

"The Public Service Commission Regulation will also address that issue saying that Public Officers are forbidden from actively participating in political activities outside their official duties. We also have to look at Section 11 of the Dominica Constitution which states that one does have the constitutional right to express oneself and participate in certain things," Letang said.

But, according to Letang: "When it suits some people, it is not right for public officers to participate and make political statements, get involved and wear party political colours. It is wrong for some today and right for some; tomorrow it is right for some and wrong for others.

"My view is that the Act does need amending and in so doing we have to take a closer look at the Constitution to ensure that people are not denied their rights and at the same time the Act does not open some people to victimization."

He continued: "You need to make it very clear as to how far Public Officers can and should go in that regard and what is it that one is trying to safe guard. Certain things are not clear in the Act and the time has come for open discussions with unions and political parties. As (general secretary) of a union I am very concerned because I have received reports from members who feel that they have been personally targeted while others do things and nothing is said and or done to them."

"It's against the Police Force policy and regulations. A police officer is supposed to be a professional. We are very concerned that police officers are wearing party colours openly and even going on platform. We are presently very concerned and discourage that totally. The Police Welfare Association can only advise members. We can't tell them what to do, we are not responsible for admonishing members, that's the role and responsibility of the Chief of Police, but we are concerned about it and would like to discourage police officers from wearing party political colours and going on political platforms," he said.

The SUN also asked for the comments on the issue from president of the Dominica Association of Teachers (DAT) Celia Nicholas; however, she said that she would respond in a few days.