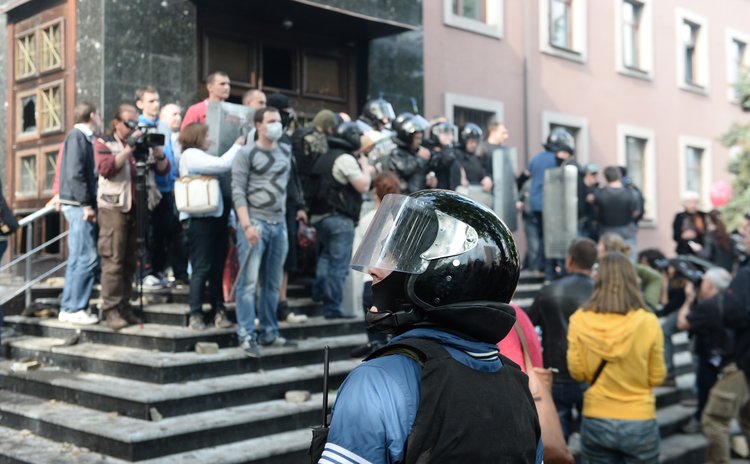 KIEV, May 2 (Xinhua/Sun) -- Clashes between pro- and anti-government protesters in Ukraine's Black Sea city of Odessa have killed at least 43 people and injured 174 others, the local government said Friday.

Among the dead, mostly pro-Russia protesters, 30 were choked to death when radicals set fire on a trade union building, while eight others died from jumping out of windows of the burning building.

Up to 50 people, including 10 policemen, have sought medical assistance after the clashes between the Right Sector, a Ukrainian ultra-nationalist group, and pro-Russia militants.

The municipal government has declared three days of mourning in Odessa.

Local police told Russia's Itar-Tass news agency that riots erupted earlier in the day between football fans from the eastern city of Kharkov and Right Sector radicals who had come from Kiev.

The violence took place the same day as Ukraine launched a military assault in its eastern city of Slavyansk in a bid to retake government buildings occupied by pro-Russia activists.

Ukraine's Defense Ministry has confirmed the loss of two helicopters. It said the aircraft were shot down by surface-to-air missiles, which it said proved the activists were not civilians but well-equipped and well-trained militants.

Russia said the military operation in Slavyansk meant Kiev had "crossed out" the Geneva agreements reached on April 17.

Calling the military move a "manifestation of a crime of feebleness of Kiev authorities," Russian Prime Minister Dmitry Medvedev urged those in power to "come to their sense ... otherwise the country's fate might be completely sad."