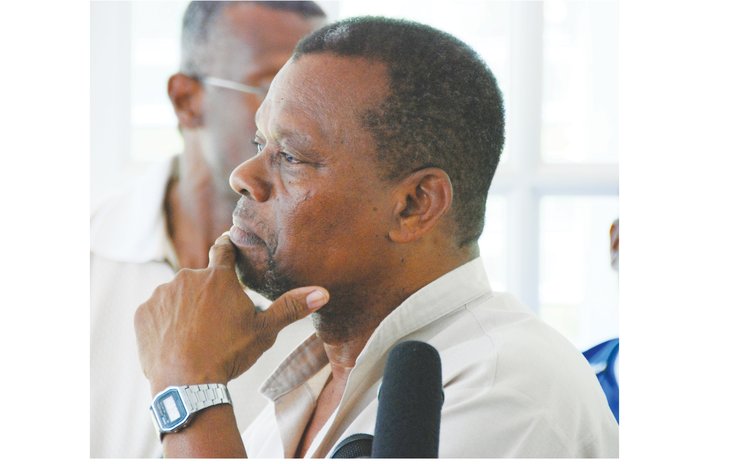 Clement 'Clem' John has loved sports since he was a child, especially cricket.

And his passion for sports and cricketing skills catapulted him from humble beginnings to public acclaim and national honours.

It all started in the early 1940s under a kenip tree in a communal yard at Bath Road, Roseau.

"I was born in a yard … a 'ghetto'… no water … no electricity… close to a kenip tree. Lots of people lived there, including children…" he said.

"The boys used to come around the kenip tree and play. That's where I became 'in charge'…in terms of the ground is mine, the bat is mine… so I became in charge at the age of five," he chuckled.

A carpenter in the yard encouraged Clem's love of cricket and made bats for him. The youngster went on to play cricket and other sports at the Roseau Boys 'small' school.

Afterwards, he attended Roseau Boys 'big' School where his sports talent blossomed and he was captain of the cricket, football and other sports teams.

Later, he excelled as a sportsman in high school and was the junior captain of the football, cricket and other sports teams at St Mary's Academy.

Therefore, it was no surprise when, at the age of 17, Clem became captain of the national youth football and youth cricket teams in the 1950s.

He quickly became a leading batsman in Dominica's senior cricket team before moving up to play for and captain the Windward Islands team.

Amazingly, at the same time he was a respected international footballer and was a vice-captain of the Windward Islands football team.

In his prime, Clem was much-admired both as a player and as a fiercely competitive captain who led the Combined Islands team in the Shell Shield, the Regional first-class cricket tournament.

One of his career highlights was when he scored a majestic 177 in 1961-then the highest score by a batsman in Windward Islands cricket.

Clem played several key innings in the Shell Shield and other Regional tournaments, including his highest first-class score of 94, and he has cherished memories of those days.

He fondly recalls batting with the legendary Sir Frank Worrell as he scored a century in a special match for Eric Gairy's XI against West Indies test-players.

A former West Indies captain, Sir Frank was manager of the Caribbean team when he was specially invited to play for Gairy's XI.

"We batted together and he scored a century, but the bowling was different…Big stars were bowling … they were bowling him at half pace and bowling me at normal pace."

"And [Worrel] said … 'In the next few years, the youngsters in the Windward and Leeward islands will dominate cricket in the West Indies team'. And it came to pass!" Clem declared.

In 1965, touring Australian spinner David Sincock thought Clem was a test-batsman and inquired about his batting position in the West Indies team.

"I felt that was complimentary . . . Here it is that an international spinner, because I batted so well … thought I was a West Indian player…

"Here is a guy on the other side seeing me as a West Indian player. That tells you how brilliant the West Indies team was," Clem recalled.

He admits that indiscipline was one of his shortcomings in his sports career. "I was a crowd pleaser, nice strokes and so on . . . with everybody clapping, I wanted to do it again," he said.

Perhaps he would have benefitted from a coach, but there was none in those days so Clem worked to develop discipline on his own.

And he has improved. "In everything I do, I am more disciplined than during the time I actually played," he said.

Clem is duly proud of playing top-level cricket until 1973 without ever being dropped.

In his day, he most admired the great all-rounder Sir Garfield Sobers, and he also thought Seymour Nurse and Lawrence Rowe were batsmen of exceptional temperament, skill and style.

After cricket, Clem had a distinguished career in public service in various administrative capacities.

He also served as Chief Elections Officer from 1982-2000 and was Chairman of the Justice Committee of Prisons and a member of the Public Service Appeal Board.

Additionally, he was an election observer for the OAS and CARICOM and served on their supervisory bodies for several Caribbean elections.

He was also a selector for the Dominican cricket team for 10 years and served on various technical committees for local cricket and football.

Clem John was honoured with the Sisserou Award for Sports in 2002, and was inducted to the Dominica Cricket Hall of Fame in 2010.