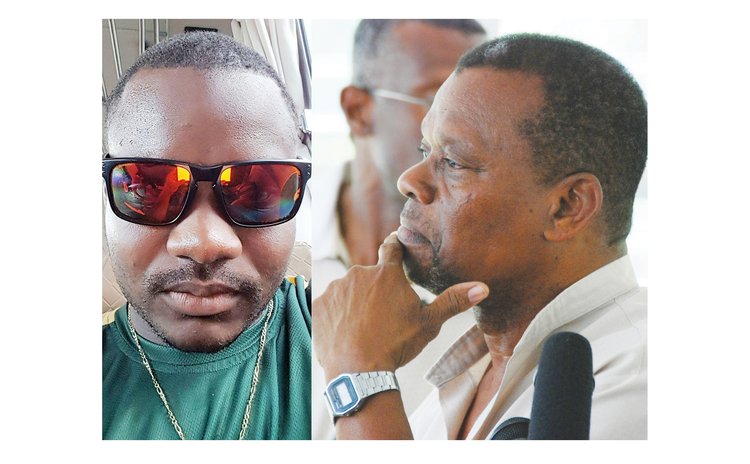 I have used the 3P method in all my sporting endeavors ever since. I have used that method in my work as a civil servant. Judge me, I have shared it before and I am now prepared to share it again. This time I am targeting those fortunate ones who are given the greatest responsibility to select the best possible team to represent the nation/region. I am of the view that some have lost their way, and therefore they are no longer capable or deeply interested in fulfilling that crucial and sensitive assignment i.e. dealing with the nation's youth in sports. The 3Ps are: Preparation, Practice and Performance. They go hand-in-hand. It is like the old saying: "who kill the man, three of us."

That method is used by many; some use it subconsciously; for example, the Ju'c-man goes to the market, buys his paw-paw or pineapple, prepares it, by cutting etc., he masters the skill of preparation of the product and then sells it to us… We then flock to him, the Ju'c-man, for more, for more paw-paw or pineapple juice. Some use 3P's consciously but inject a foreign ingredient in the final production in order to sell more to make more profit.

Let us look at the 3P method generally, and if needs be listen to part of Bob Marley's song: "Who the Cap Fit" or the popular phrase of "Where the chips fall." From my understanding the franchise was meant to be a youth development programme (cricket development), not a pension, not to give one who can hold a bat a job (employment). It was meant for the Hodge, Benjamin, Robinson's and other young aspiring cricketers.

Preparation – Personally 80% of preparation has to do with you "the cricketer" i.e. internally. Whatever one does in life one has to prepare, one has to get himself in readiness. The musician prepares for his big concert, the teacher prepares for school next day, all ah we prepare for Christmas, for hurricane season, for carnival etc. Similarly, the cricketer prepares for the big occasion (the test match). To execute that preparation, the Windward Island Cricket Board appoints a fit and proper person to undergo that assignment of preparation of the team. A qualified coach is therefore appointed. A base is established (that is presently in Dominica W.P.S.S). A paid 15 man team is selected. All of whom are left on their own after official practices. As I understand there is hardly any official training in the pm period so you are left on your own. The official responsibility for the preparation and practices is left in the capable hands of the COACH. The coach would therefore be totally responsible. The coach therefore should have a crucial role to play in the selection of the Windward Island team. The coach is the motivator, "the individual who could cause one to behave in a particular way, in a positive way"; 80% of preparation has to do with you. However the coach will guide you along; for example, the passion for the game comes from you, the commitment, the professionalism, the discipline, the motivation, the focus, the temperament, the application, the will to do good, the will to be successful, your attendance at practices, self-confidence, your total respect for the authorities particularly the coach, staying away from drugs and maybe grog etc. Those things cannot be taught with a bat and a ball in your hands. It is within you, but ably motivated by the coach. You are the maker, you are the breaker. You ought to follow the instructions of the coach. He ought to inspire you, to guide you although the ball is in your court. You are at school, the Franchise was meant for you.

Practice - The coach's trump-card. The drill is for him to introduce. Whatever you do, do it well, do it to the best of your ability. Cricket, particularly batting is no longer a bat and ball scenario. Cricket, particularly batting, is a science. Yes, you are guided by the technology. It is an art and in order to master that art you have to practice, practice and practice. One may say that it is the most crucial part of the game and of the whole preparation. Those of you who are Christians know very well that Papa God did not give Smith, Kholi, Root, Amla more talent than Bravo and them, but through a well-organized association and through their own personal effort they developed their talents and skills by going to the nets morning, noon and night. It is the responsibility of the coach, however, to assist you in developing that talent, to strengthen your strong points, to overcome your weak points, to give you a workable programme of "How to Train" to guide you, to protect you.

Practice which is the second P of the three P's method is vital. Practice, they say, makes perfect. How true that saying is. When one practices he has become a master of his skills and, therefore, he is able to perform efficiently and his self-confidence increases. The coach of the Volcanoes under the auspices of the Windward Board has the responsibility of getting the team ready and therefore should play an integral part in the selection of the Windward Islands Volcano squad. The coach's responsibility is to shape the player into a well-fitted team member. Remember the topic: "The omission of J.R".

Performance - Performance undoubtedly means "one's personal achievement". Performance which is the third P and on which this statement was provoked, I say this: Performance is not always measured or revealed by statistics. Obviously, figures play an important role, but performance in the cricket arena comprises of many more qualities than only figures; example, professionalism is one of them. Take a good look again at Preparation and Practices. For example, should we consider scoring a century in one game out of ten games to be performing in the tournament? What of consistency? Have you measured consistency with that one performance? Performance, I must agree, is what brings success to you personally, to your team, to your country. Your general behavior, professionalism should form part of your performance.

Therefore, performance is tied to your preparation and practice. In cricket, especially as a batter, there are ups and downs. There are occasions when everything is against you; if you are weak and not guided, and not being supported by the coach and others, particularly the chairman, "Woe beyond to you." The chairman, the main selector, must understand that young talented players being out of form for a period of time does not constitute a failure on the part of the individual or even lack of performance. It could be anything outside of cricket; this is why selectors particularly those heading the organization should talk to "dropped players" in order to shield them from self-destruction.

As a selector, you ought to have a good knowledge of the game, follow the criteria given (with discretion when necessary); know the players from whom the selections are made- the good, the bad, and the ugly. Selectors must understand that young productive cricketers for whom the West Indies Board put together, that development programme ought to be spoken with when performance is going low, rather than rocking their self-confidence in the market square. "This is his last chance" they often say. Remember the topic "J.R omission, is it a mistake or oversight.

(Full disclosure: JR is my grandson)

The non-inclusion of J.R to the 15 man team of the W. I Volcanoes provoked me to write this article. It is meant to be constructive. Information indicates that the non-inclusion of J.R on the squad to represent Volcanoes is more "personal" than a "Mistake or Oversight". Investigation revealed that the decision to axe J.R was anticipated long before the Windward Islands Tournament. Only runs could have prevented that. I am prepared to defend it by stating the following:

-Reference is made of the 3Ps in connection with the omission of J.R on the 15 man team of 2017. It is revealed by informed sources connected to the W. I Volcanoes based at the W.P.S.S that J.R was undeniably the most consistent cricketer who attended preparation during the 2016 season. J.R had been present 99% of the occasion when the team was asked to come in. In thunder, lightning and rain, J.R was present, I, Clem John can vouch to that. The authorities at the W.P.S.S can vouch to this also. The same goes for the attendance at practice sessions. Sometimes he was there alone. From information received not even the chairman of the Volcanoes board in Dominica has ever visited the grounds to witness any training sessions. Talk not of selectors based in St. Lucia, St. Vincent and Grenada. The Attendance Register kept by the Volcanoes official office is available for the selectors to inspect, and maybe by the general public also, if the rules allowed. Have the selectors, particularly the chairman based in Dominica, ever witnessed whether the saying "a fair days work, for a fair days pay" is being honoured or ever executed. Performance is tied to Preparation and Practice.

Mr. Chairman when you are asked to jump, you must not just jump; ask questions. Mr. Chairman, have you seen the following or were they ever laid on the table for discussion; i.e. the register, coach's report or is the selection manipulated by one country or outside forces? Was there an eye-ball to eye-ball selection?

-In 2017, at the age of 23, appointed Vice Captain for Dominica, scored 152 runs in six games at an average of 12. (Dropped) Only failure. Poor batting performance but not poor cricket performance. Check the captain; he may have something to say.

Dropped at the tender age of 23 having just been selected as vice-captain on the Dominica team which won the tournament, J.R was dropped. No explanation or reason coming from the chairman of selectors; from Volcano representative; from the team's captain; Cricket Association; the coach – yes the coach #1 technical advisor and foreman.

Jerlani Robinson was being groomed for captain of Dominica from the tender age of 13, just like Liam Sebastien was under the baton of Lockhart Sebastien. Where is the baton? J.R captained Under 13, Under 15, Under 17, Under 19 and also Captained the Windward Islands Under 15 and Under 19. Imagine one year of what is being considered by Mr. Chairman as poor batting performance he was dropped without an explanation coming from authorities of the Windward Islands Volcano. Where is the professionalism?

Finally, listen to Emmanuel Loblack (Mano) a cricket enthusiast, sports administrator, radio personality, selector: "Do not stifle (chock) young inspiring cricketers whose main ambition is to play cricket for personal achievement in their life". "Guide them along", Mano says, "Speak with them".

I whole-heartedly agree with Mano. I, therefore, strengthen his point by saying this: "tell them what are their strengths and weaknesses". Mr. Chairman don't use the one-year method on the youth, i.e. "one year in, one year out". This is not a raffle. This method cannot be helpful and productive. It is a runaway method. Shockingly, other players have been given eight to nine years under observation. Consistency or inconsistency.

Have you ever heard of a worker being dismissed legally but on investigation that same worker could be wrongfully or unfairly dismissed? The omission of J.R could be considered to be immoral. To the Windward Islands selectors, take a good look at who represents the other franchises… the youth, the wise ones, the upcoming. The accent is not on jobs for the boys, my boys. The accent is on development.

In conclusion, I have been a selector many times and I have always sympathized with selectors. It is a painful, payless, priceless and personal job (the four Ps). Personal in that "I want Tom in, Dick out" and "Harry stays in the balance". With fairness and professionalism you cannot go wrong.