Clement Marclin Jr: "I expected one death, I got five'' 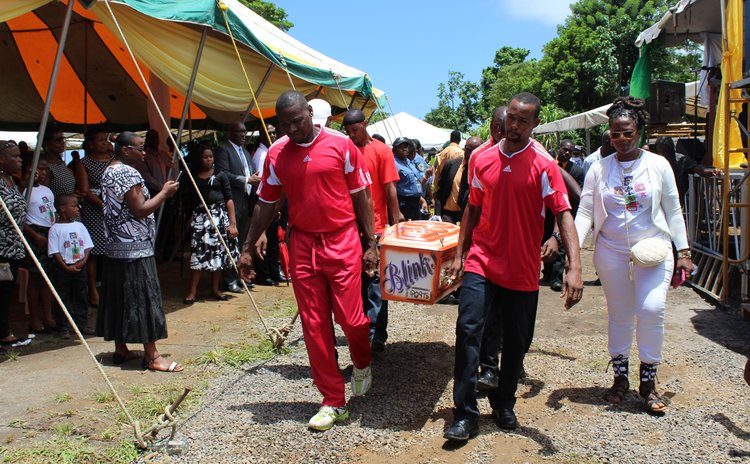 Carrying "Blink's" coffin to the funeral

Penville was a village in extreme shock after five of its promising young men died about 7 am on Sunday 6, August when a vehicle plunged into a 400 feet precipice near Ambas in Vielle Case killing all five occupants.

They were buried together on Saturday.

Vernelle George the girlfriend of Marcellin, the driver, said the incident was painful; she is heartbroken.

"I am still baffled," she said.

And she revealed that her boyfriend dreamt of the accident two days earlier.

"When he woke up on the morning of Friday he told me… 'girl I had a dream that was sooo real'. Five people were trying to take his car from him and he was fighting with them for it not to happen. I told him to be careful and to park his vehicle safely," she said.

Speaking to the SUN in an exclusive interview at her home in Upper Penville, George, surrounded by family and friends, recounted that morning.

"That night before the accident, I blamed myself for not calling him. Before bed, I was like you know, strange I have not heard from him and I said let me call him before I go to sleep. But I just don't know where that sleep came from…I fell asleep and didn't call him. Maybe, if I had called him I would have been able to give him some advice and caution him," she said.

That morning she called but his phone was apparently dead.

"I saying his phone off, maybe he is outside doing something and his phone was charging, so I was not that worried," she added.

Then someone told her that there was an accident and Chris and four others had died.

"That was when I lost all my concentration at work...I was crying and asked to leave," she said. "On arrival at the scene I saw lots of people and his friends…people crying, I asked to see him but they told me I can't go there".

She continued: "I was brought to Portsmouth and they called me in. When they opened that thing that he was covered with, I could not believe my eyes.

"The face that I saw was half of a face. I shook him and begged him to get up. But it was real. He was dead and lifeless. His body parts were outside and he had a huge hole in his foot that further broke me down. I started to scream, then I wished I could have said a word and bring him back to life".

Vincent Lewis, a close friend of the men who died, especially Marcellin, said as he tried to process the incident his mind told him that evil forces were at work.

He said: "I have no choice to say that evil forces are involved. We called him Floss and he told me about this dream that he had involving five guys and his car. He spoke to me about that dream on Saturday and the next day he is dead in the car.

"I said to him sometimes we have dreams and we taking it for joke. You never know, it's evil spirit, people hating people…I don't like the vibes. We need to come together as a community and pray, call on the Lord".

Clement Marclin Jr, another close family friend of the deceased men, said before the victims of the accident were identified villagers thought he was among the dead.

"When I heard about the accident, I jumped in my vehicle and while passing people kept saying 'but look he driving,'" he said.

Clement soon discovered that he had lost five friends.

"I expected one death and then got five", he said. "We now have to seek God. Put our full trust in Him knowing that with him all things are possible."