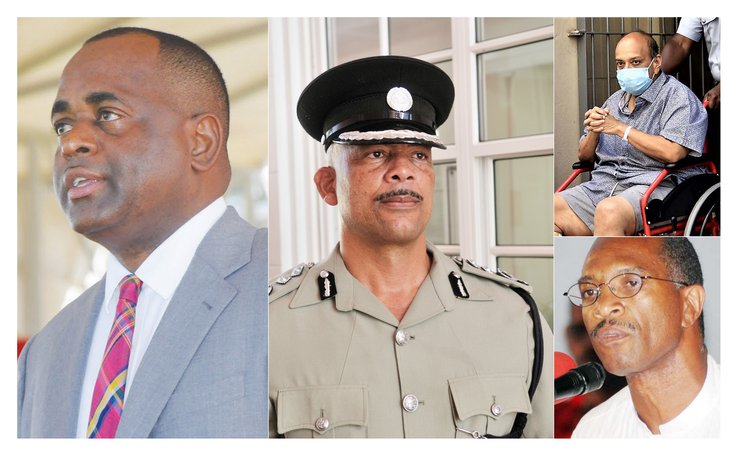 At the forefront of international intrigue: PM Skerrit, Corbette, and Choksi with Crispin Gregoire, bottom right

Choksi, the Indian-born, Antiguan diamond dealer who is wanted by the Indian judicial authorities in connection with a US$2 billion bank scam, was arrested here on 25 May and was later charged with illegal entry. Dominica police claimed he sneaked in through the back door, but in a recent interview with The Sun, the precious stone trader charged he was kidnapped, brought to Dominica against his will and was met at the Cabrits jetty by Corbett after he was transferred from the yacht that brought him here onto a Dominica coastguard vessel.

The Sun made multiple attempts to reach both Blackmore and Corbett, neither of whom has contradicted Choksi's story or has spoken publicly on the matter. Gregoire told The Sun it's time the authorities end their silence on the "embarrassing" saga.

"They have a responsibility to come clean with the Dominican people," argued the former Dominica ambassador to the United Nations (UN). "It's really incredible that the charge that they put on Mr. Choksi is that he entered the country illegally. That may be so, but why was the commissioner of police receiving him? This all points to a conspiracy. And when there is a conspiracy, it needs to be fleshed out and explained, and I think these public servants, including the minister of national security and the commission of police, they owe the Dominican people an urgent explanation of what happened in Dominica because it has given us a bad image abroad."

As news of Choksi's discovery here exploded into an international sensation, and as rumblings of cross-border kidnapping involving Antigua and Dominica began to grow louder, Gaston Browne, the Antigua and Barbuda prime minister, told media both in his country and in India that he was certain Choksi would be repatriated to India in quick time. Browne also said he had asked Skerrit not to deport the diamond dealer back to St. John's, where he enjoyed legal and constitutional protection.

"I have spoken to PM Roosevelt Skerrit of Dominica as well and asked for his cooperation. The most significant issue at this time is for him not to be repatriated to Antigua because he is an Antiguan citizen . . . So we have asked the Dominican government to collaborate with the Indian government and have him repatriated directly to India," Browne was quoted by the online publication, DNA India, as saying in a 27 May article. "PM Skerrit and I are very close allies and we collaborate on many issues and it was not a difficult proposition to convince him that he needed to cooperate with Antiguan and Indian governments."

It was not clear if the discussion with Skerrit took place before or after Choksi arrived here, but in his interview with The Sun, the 62-year-old diamantaire insisted there was "no question about it" that the three countries had colluded to forcibly return him to New Delhi because efforts by the Indian government to have him extradited were being frustrated by protracted legal challenges.

"He [Skerrit] is much more exposed, unfortunately, because he sent [the] coast guard, he sent police . . . to pick me up," Choksi told The Sun when asked whether he believed the Dominican prime minister was aware of the conspiracy. "Why [the] police chief should come to pick me up, I don't know."

Gregoire, the career diplomat and former special adviser to the president of the UN general assembly and director for the Caribbean at the UN Development Programme, described the situation as an "international scandal" and "state-sponsored terrorism."

In addition, he said, it showed a pattern of such behaviour, citing as an example the case of Iranian Alireza Zibahalat Monfared, who was appointed a Dominican ambassador and handed a diplomatic passport while he was wanted by Tehran for allegedly embezzling billions of dollars while helping the country evade UN oil sanctions.

"We're clearly a rogue state when we can be involved in state-sponsored terrorism. This is what it is," argued Gregoire. "This story, more than any other story, confirms that Dominica has become a rogue state, and that the international community needs to take action against what is happening in Dominica because this is not the first time that Dominica has been embroiled in international scandal." The prime minister has dismissed any suggestion of collusion, describing the allegation as "total nonsense," and insisting that his hands are clean.

However, Gregoire isn't buying the denial, telling The Sun there were too many unanswered questions.

"If his hands are clean, he must tell us how his hands are clean and why his commissioner of police . . . would be meeting Mr. Choksi at the Cabrits. If his hands are so clean, well give us the truth. We're only calling for the truth," stressed the diplomat. "Here's Mr. Mr Stewart's challenge. Now that Mr. Choksi has given us all these details, Mr Skerritt has said nothing, which tells me that Mr Choksi is likely to be telling the truth, and nothing but the truth. I rest my case right there."